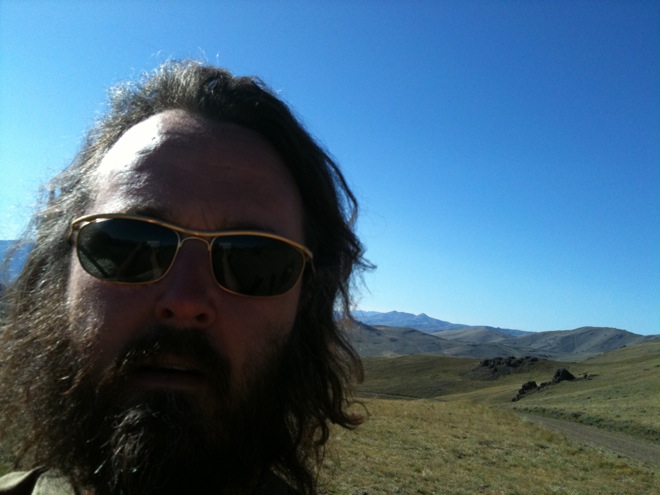 Guitar wizard Brett Netson ponders the end of American exceptionalism on Simple Work for the Dead, out Tuesday.
Images courtesy The New Black

Like the Occupy movement, Built to Spill and Caustic Resin guitarist Brett Netson is mad as hell — and he’s got the meditative solo debut to prove it.

His swirling Simple Work for the Dead, released Tuesday by indie label The New Black, departs from the interlocking rock of his present band Built to Spill as well as the howling Black Sabbath homages of Caustic Resin to paint a picture of a dystopian American empire.

“Ever since deregulation of the Federal Communications Commission in the Clinton years, it’s been like all bets are off for anyone who doesn’t have a million dollars,” the Boise, Idaho-based Netson told Wired.com in an e-mail interview. “It feels like a super-slow-motion collapse into fascism. Driving around the country once or twice a year, I’ve really seen our culture morph into an infantile Nowhere Land.”

Netson has taken a much different sonic snapshot of that Nowhere Land than John Lennon took in The Beatles’ philosophical hit “Nowhere Man.”

Simple Work for the Dead’s “God Is Wrong,” available at right as a free download, takes on the “godless waste” of America’s postmodern holy wars, which Netson characterizes as our “fundamentalist religion of brand management and fixed-market capitalism.”

Netson’s solo debut contains a cover of Bob Dylan’s immortal protest song “Masters of War” and builds upon the activist rage of Caustic Resin’s brilliant 2003 full-length Keep On Truckin, best represented by “The Wizard of the Upper Snake River” (watch the video below). He says he’s quite happy that the Occupy movement has helped unplug us from The Matrix and caught us up on currently disturbing events.

“I’ve been wishing for a populist movement, and here it is,” Netson said. “It’s not like the redneck enlightenment vision I had, but I’ll take it.”

But the Occupy movement’s struggle is only beginning, as infamously violent police tactics escalate in concert with the protests’ viral growth. It’s becoming increasingly clear that whether it is Egypt’s Tahrir Square or the University of California at Davis, the powers that be don’t seem exactly ready to cede power without a draconian fight.

“The law enforcement shenanigans are a sophisticated experiment,” said Netson. “They’re fucking playing around with us, and it is extremely disturbing. But public consensus is ultimately stronger than any power construct. It’s just a question of getting the powers to cooperate in a meaningful way.”

Read 3632 times
Published in News Technologique-Tech News
More in this category: « Facebook Study: It's a Small(er) World After All U.S. Intelligence Will Train Super-Sleuths With Videogames »
back to top