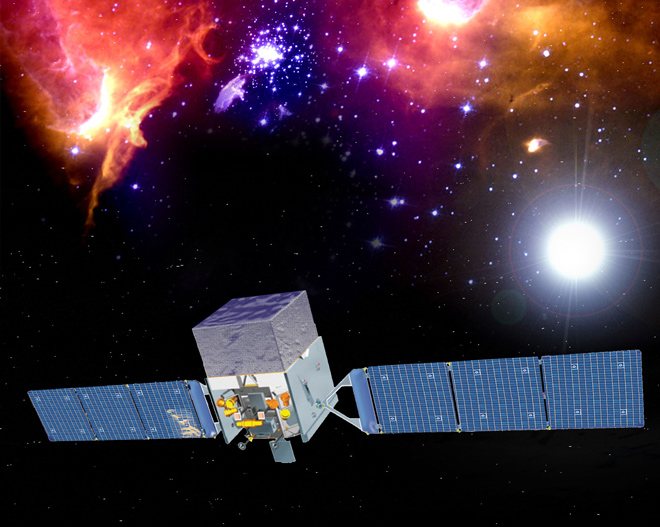 In 2008, the Italian satellite PAMELA picked up an unusual signal: a spike in antimatter particles whizzing through space. The discovery, controversial at the time, hinted that physicists might be coming close to detecting dark matter, an enigmatic substance thought to account for 85% of the matter in the universe. Now, new data from NASA’s Fermi Gamma-ray Space Telescope confirm the spike. Alas, they also undermine its interpretation as a sign of dark energy.

Theorists generally believe that when two dark matter particles collide, they should annihilate each other to produce ordinary particles, such as an electron and its antimatter twin, a positron. Thanks to Einstein’s iconic equivalence between energy and mass, E=mc2, each of those particles should emerge with an energy essentially equal to the mass of the original dark matter particle. So when the PAMELA team saw a spike in the ratio of positrons to the more abundant electrons over a particular slice of the energy spectrum, some physicists got excited. Perhaps PAMELA was seeing evidence of such annihilations.

However, because positrons are produced elsewhere in the universe, including in pulsars and neutron stars, the result was inconclusive at best—although it stirred quite a frenzy. At a conference where the preliminary PAMELA data was being presented, physicists used cell phones to snap photos of the Italian team’s slides, then wrote and published papers on the Internet about the data’s dark matter significance, all before the results were prepared for submission to a refereed journal.

The plot thickened in 2009 when the Fermi team released data from its own satellite’s look at the cosmic ray spectrum, which showed no signals out of the ordinary. However, in that analysis, the Fermi group considered the sum total of all charged particles, electrons, and positrons. That was because the telescope was designed to measure neutral gamma rays and has no onboard magnet for distinguishing negatively charged electrons and positively charged positrons.

Physicists hope they might use the accumulating data on antimatter to home in on the mass of the weakly interacting massive particle (WIMP), which is thought to be the fundamental dark matter particle. The expected signal would be a steady rise of positrons over a given range of energies, followed by a sudden drop-off. Noting the energy level—physicists measure this in billions of electron volts—at which the positron signal drops off would allow physicists to calculate the WIMP’s mass.

After the excitement generated by the PAMELA result, Stanford University physicists Stefan Funk and Justin Vandenbroucke wanted to zero in on the positron signal. They found a way to do so, using Earth itself as a particle filter. “You can basically look in certain directions from which only electrons or only positrons will get through the Earth’s magnetic field,” Vandenbroucke says.

Funk and Vandenbroucke’s method, which has been submitted to Physical Review Letters, confirmed the Italian result. That is, that the relative abundance of positrons seems to rise from 20 billion to 100 billion electron volts. And for the first time, the researchers showed that the signal continues to get stronger up to 200 billion electron volts. If what they’re seeing are remnants of dark matter deaths, then the mass of the WIMP would have to be at least 100 times that of a proton, which is within many theoretical predictions.

“As a technical feat, it is beautiful,” says Harvard University physicist Doug Finkbeiner. Still, he says it’s too soon to say whether the new data say anything about dark matter. A close look at the results from PAMELA and Fermi suggests that the positron signal likely continues to get stronger at higher energies, Finkbeiner says, even beyond the upper end of the latest Fermi measurement. That is, maybe this isn’t a distinct spike but rather a broad trend in cosmic ray spectrum, the source of which is impossible to say. The new paper is “a wonderful confirmation of the PAMELA result,” he says, “however the positron signal will likely be there whether the positrons come from dark matter annihilation, or from pulsars, or from tooth fairies.”

“Confirming the rise of positrons is good, it means there’s something new going on,” adds University of Chicago cosmologist Michael Turner, whose 1990 paper with Frank Wilczek, a theorist at the Massachusetts Institute of Technology in Cambridge, first suggested looking for positrons as evidence of WIMP annihilations. “But without the sudden fall, we don’t have a smoking gun.”

The search for Turner’s “smoking gun” is now counting on another detector, the $2.2 billion internationally funded Alpha Magnetic Spectrometer (AMS-02), which was carried to the International Space Station in May. AMS-02 includes a powerful magnet to parse cosmic rays and should be able to probe for the positron excess, and the sudden drop-off, at significantly higher energies than the Fermi telescope can manage. “AMS-02 should be able to make a final statement on this,” Funk says. “This is something we are all eagerly awaiting.”