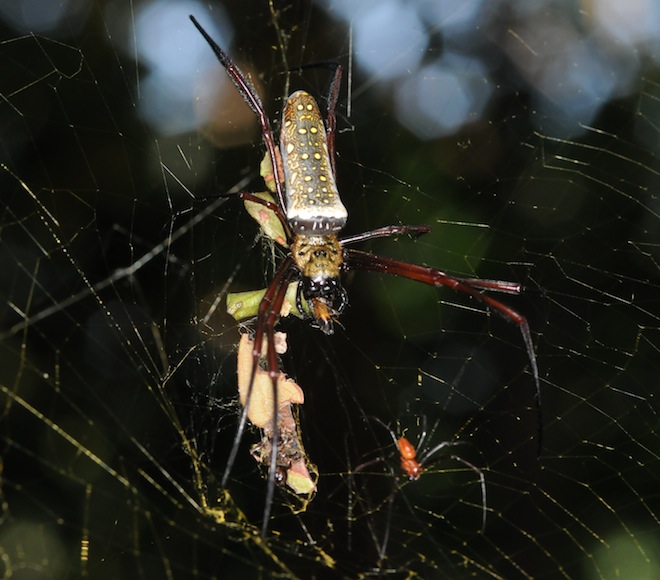 A tasty spider and its bundle of prey might make an excellent treat for a bunch of marauding ants. So to protect their homes, and themselves, golden orb weavers (Nephila antipodiana) use chemical warfare.

Researchers had long wondered how this species of orb spider — typically found in the ant-rich tropical forests of Singapore, Indonesia, Thailand and the Philippines — manage to avoid becoming dinner.

They found that the spiders coat their webs in a chemical called 2-pyrrolidinone, which acts as a deterrent to many insect species, including ants, moths and caterpillars. The findings appear Nov. 23 in the Proceedings of the Royal Society B.

In an experiment, ants refused to cross lengths of spider silk covered in 2-pyrrolidinone. The researchers suggest this may be because similar chemicals are found in the poison glands of several ant species. The substance could also be triggering a panic response in the ants, which use the same chemical as an alarm pheromone.

The scientists found that smaller golden orb spiders didn’t produce the chemical because their webs were too thin to support ants.

Read 4931 times
Published in News Technologique-Tech News
More in this category: « Signal of Destroyed Dark Matter Seen in Space Telescope's Data A Charlie Brown Christmas Comes to the iPad »
back to top