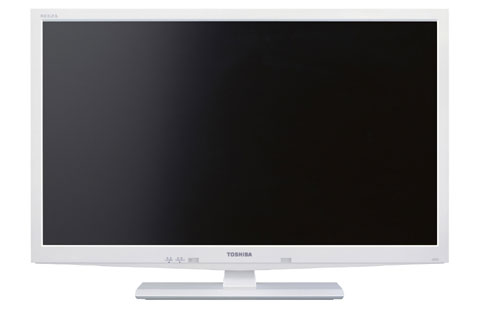 TVs and other home electronics are notorious power hogs that continue to draw electricity even after you ostensibly shut them down. But now a cleverly designed chip from Toshiba has the power (literally) to change that.

Toshiba’s Regza 32BE3 television, which will debut mid-December, includes a so-called “Eco Chip” that prevents the 32-inch HDTV from drawing any AC power after you mash off the power button on its remote.

TVs typically go into a “standby” mode when you power them off. The circuitry hibernates, if you will, but not all of it turns off completely, and this allows the TV to quickly turn back on when you click the remote. Standby power usage is sometimes called “phantom” or “vampire” power. Normal TVs — or, at least, modern models — sip around one watt when they’re switched to standby. A watt is one joule per second, and if something draws 1 watt nonstop for a year, that translates to 9kWh, about $1 of energy costs. Energy Star 5.0-rated sets must use less than one watt in standby or sleep mode.

Although this rate of consumption doesn’t sound like much, when you pair your TV’s standby draw with all the other things you keep plugged in all the time — set-top boxes, videogame consoles, speakers — those little amounts add up. Add in your notebook or PC, and standby mode has the potential to be a relevant energy drain, especially when multiplied across the hundreds of thousands of wired-in households nationwide.

The Regza 32BE3 isn’t some sort of perpetual motion machine, though. The Regza 32BE3’s Eco Chip is powered by electricity stored in a large-capacity capacitor, and its AC power connection is severed using a relay. Capacitors facilitate passive energy storage, acting like temporary batteries when they’re disconnected from their charging circuit. In Toshiba’s case, the capacitor provides the Eco Chip with sufficient power to accept input from the remote, so the TV still has its instant-on behavior.

When the set is in operation, the Regza 32BE3 TV also has two power-saving modes, reducing backlight intensity by 50 and 75 percent respectively. Image quality automatically adjusts based on brightness level, so your picture won’t suffer even when brightness is low. You can also set the 32BE3 to switch to its zero-power standby mode when the TV hasn’t received input for three hours (not a great option if you’re a fan of watching those all-day-long Star Wars marathons on Spike TV, though).

Toshiba says its 32-inch Regza uses only 45kWh of power per year, 27 percent less than its 32-inch predecessor, the Regza 32A2, primarily thanks to its LED backlighting. LED-backlit LCDs are the most efficient TVs available today. Plasma screens, by comparison, use two to three times more power than an LCD to deliver an image of equal brightness.

While this is all great news for your monthly electric bill, power-saving features aren’t necessarily a big selling point for consumers.

“I think power consumption is not that high on the consumer consideration list, at least in the US,” DisplaySearch analyst Paul Gagnon told Wired.com via e-mail. Indeed, when it comes to TVs, consumers tend to value price, size, brand and features over eco-friendliness.

Luckily, however, TV buyers shouldn’t really need to concern themselves. In recent years, the International Energy Agency passed the One-Watt Initiative to limit standby energy use of appliances to a maximum of one watt by 2010, and half that by 2013. Eco-conscious U.S. states (like California) and other countries have added their own similar measures.

Read 3859 times
Published in News Technologique-Tech News
More in this category: « Global Smartphone Adoption Approaches 30 Percent An Open Letter to Police on the Occasion of This Eviction »
back to top