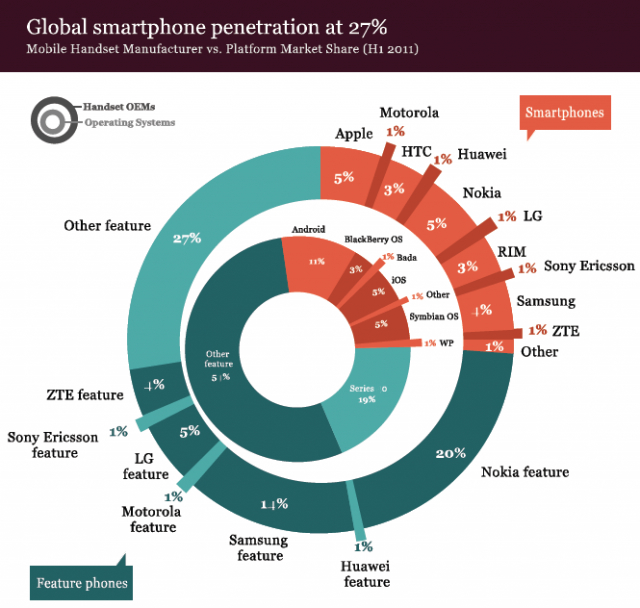 A breakdown of how the smartphone and feature phone landscape looks across the globe. Image: Vision Mobile

Feature phones still dominate the world’s wireless landscape, but in the United States and parts of Europe, smartphone adoption is surging. According to figures released by VisionMobile, a “market analysis and strategy firm,” smartphone adoption has reached over 27 percent around the world.

But while smartphones remain a luxury for most, mobile phones in general are becoming a necessity. In fact, a 2010 study indicated about 77 percent of the world’s population, or 5.3 billion people, would be mobile service subscribers by the end of last year.

In terms of cellphone trends in the United States, more and more people are ditching feature phones for smartphones, but two competing studies skew this trend differently. A Nielsen study from early November says 43 percent of U.S. mobile phone users have smartphones, whereas the VisionMobile study pegs the number at 63 percent of all North American cell phone customers. As for Europe, VisionMobile found smartphone penetration to be at 51 percent.

As smartphones transition from luxury items to lifestyle staples, new phone owners are focusing on low-priced options and budget data plans. For much of the world, particularly in large but low-income markets like India and China, pre-paid mobile phones make the smartest cell phone choices. A number of wireless carriers, both in the United States and abroad, are now delivering this convenience in smartphone handsets as well.

Not surprisingly, Android and iOS are leading smartphone adoption, with Apple and Android handset manufacturers like Samsung and HTC snagging a significant market percentage as former giants Nokia and RIM cede their dominance. However, Symbian-based Nokia phones and BlackBerry devices are still faring well in pre-paid markets.

In the United States, low-income consumers have increasingly come to rely on mobile phones for their communications needs, and landlines are seen as luxuries. This has become the norm for the under-30 set, as well as people who rent rather than own their home. 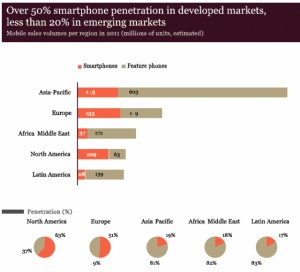 In Asia, Vision Mobile found that smartphone adoption is around 19 percent, but that figure is a bit deceptive.

Asia, in case you haven’t brushed up on geography recently, is a huge continent, and its populations, and thus trends, vary significantly from country to country, and region to region. For instance, 46 percent of Taiwanese mobile phone owners have a smartphone, and Thailand and Malaysia are seeing increasingly higher levels of smartphone penetration.

And get this: China has recently surpassed the United States in the smartphone market by volume, according to some estimates. China is also reported to have the highest number of cellphone users who actually own two or more mobile phones. Apple CEO Tim Cook said China is the company’s second most important market, and iPhone purchases are an important reason for that.

In Middle East nations like the United Arab Emirates and Saudi Arabia, mobile phone adoption is also exceedingly high, each over 150 percent as of mid-2010.

Africa and the Middle East (which were bundled together) and Latin America had the lowest smartphone adoption in the Vision Mobile study, with only 18 and 17 percent adoption respectively.