Was This NFL Flop Real or Fake?

Football or Football (soccer)? Which do you like? Unfortunately, one of the things associated with soccer is the fake falls. Ok, what do you think about this fall by Jerome Simpson?

In case that video doesn’t last, Scott Fujita seemed to push Simpson after an altercation in a pile. Simpson flew back quite a bit. The fall prompted at 15 yard penalty by the referees. Here is a shot of the action. 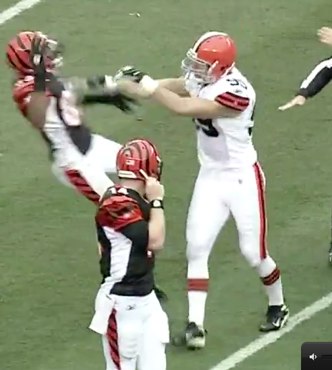 You know what comes next, physics. Actually, I am pretty sure that a penalty like this is not reviewable. But if it was, the NFL could call me.

First, what is there to look at? I can use Tracker Video Analysis (there should be a new game – every time I link to Tracker, you have to drink) to get the motion of both Fujita and Simpson before and after the “collision”. Note that this won’t be exact data. The video isn’t perpendicular to the motion and the players are moving in three dimensions. Nonetheless, I can get an estimate for their velocities.

Before looking at the motion of the players, what could happen? Well, if Fujita collides with Simpson and pushes on him then momentum should be conserved. Why? Diagram time. Here is the interaction between the two players. 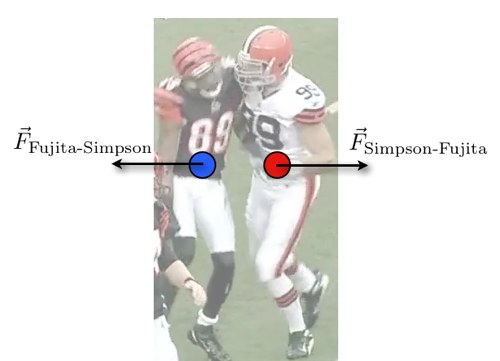 Looking from a physics view, it doesn’t matter which player pushed. What matters is that this force is between the two players and has the same magnitude. The force of Fujita pushing on Simpson is the same (but opposite direction) as Simpson pushing on Fujita. If I assume no other external forces (no gravity and no force from the ground) then the momentum principle says:

This is basically conservation of momentum. The momentum before and after the “altercation” would be the same if you ignore the players pushing on the ground. For gravity, you can just look at the changes in momentum in the horizontal direction. Gravity doesn’t pull this way, so it wouldn’t have any effect on the horizontal momentum.

Watch the video again. It looks like Fujita is in the air for a good part of the interaction. If that is the case, horizontal momentum should likely be conserved assume Simpson isn’t also pushing. Here is a shot during the interaction.

Ok, now for the velocity. Here is the horizontal velocity of Fujita both before and after the altercation (I “altercation” fits better than “collision” for this situation). 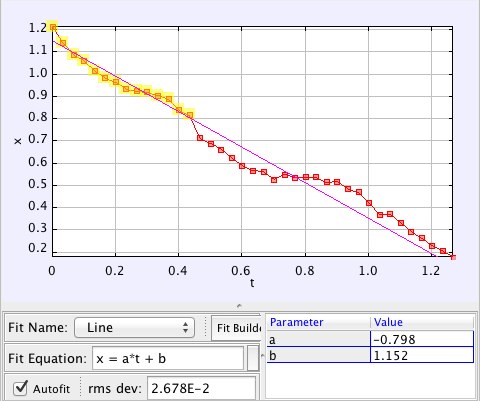 Yes, Fujita doesn’t have a constant velocity before the altercation. That is because he is getting up and pushing with his feet. But, it is constant enough that I can say he was moving about 0.8 m/s. What about after the interaction? After he is with around the same horizontal speed – about 0.9 m/s. Now, what about Simpson? Here is his plot: 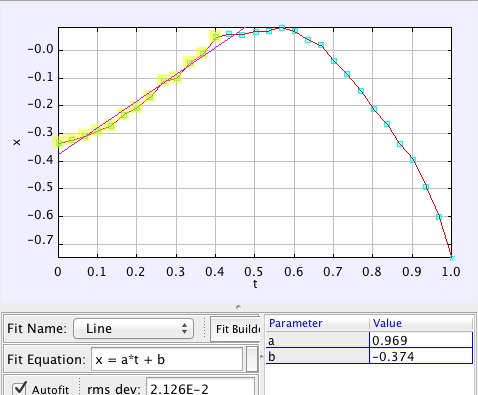 Now for the momentum. Wikipedia lists Fujita’s mass at 113 kg and Simpson’s at 88 kg. This would put the total before and after horiztonal-momentum (of the system consisting of both players) at:

What does this say? This says that momentum is not conserved if you only consider the interaction between the players. What could have happened then?

Ok, so it IS possible Fujita pushed him. Well, he clearly pushed – but did he push that hard? We can get another estimate here. What is the change in momentum for Simpson?

Since the change in momentum of Fujita is essentially zero, this change in Simpson momentum must be from the force exerted by Fujita on the ground (and the ground on Fujita). From the video, I estimate that he was in contact with the ground AND Simpson for about 0.3 seconds. This net horizontal force on Simpson would then be:

What would be the effective coefficient of friction for Fujita’s shoes to pull this off (or maybe I should say push this off)? If I don’t consider that Fujita is pushing UP on Simpson, then the vertical component of the ground on Fujita would just be his weight (113 kg * 9.8 N/kg = 1107 N). This would give an effective coefficient of:

0.82 may seem like a large coefficient of friction – but remember, these guys wear cleats. So, it WAS Fujita’s fault then? Not so fast. What if Fujita pushed 909 N on Simpson? In that case, there were be two important forces on Fujita: the 909 N from Simpson (pushing back) and the 909 N from the friction between his shoes and the ground. This would make a net horizontal force of about 0 N (since his horizontal momentum doesn’t change much).

What would it look like if momentum were conserved? In order for Simpson to have that large of a change in momentum, Fujita would have to have an equal but opposite change in momentum. This means he would be moving 1.6 m/s backwards after the collision (which he clearly did not do)

But there is something else to consider: angular momentum and torque. Both of these forces would exert a torque about the Fujita’s center of mass. Here is a diagram showing those torques.

Although these forces add up to the zero vector, the torques do not. Both of these forces would produce a clockwise change in angular momentum. So, if Fujita were responsible for Simpson’s motion you would see him sort of “falling back” after the shove. In fact, Fujita seems to remain fairly upright during the whole process and does not appear to tip back.

After video review, the ruling on the field stands. 15 yard penalty. Clearly Fujita is a Jedi and using the Force to push Simpson.