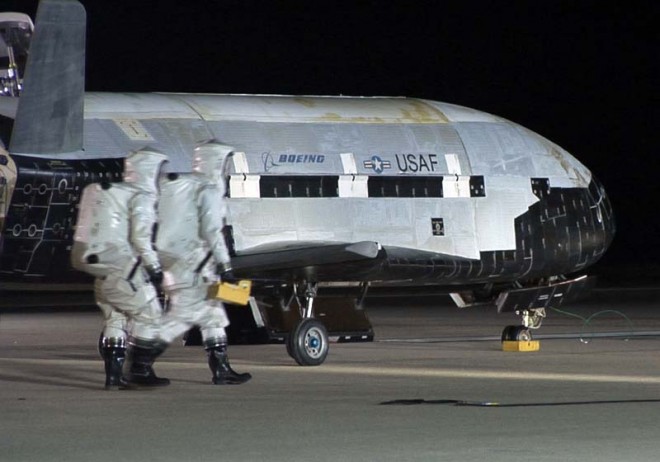 The Air Force’s mysterious X-37B space plane just got a little more mysterious. The 29-foot-long, reusable mini-shuttle was designed to spend up to 270 days in orbit. The 270th day of the winged spacecraft’s second flight is today, but the military has no intentions of bringing the billion-dollar robotic vehicle back to Earth just yet. “It’s still up there,” Maj. Tracy Bunko told MSNBC.

Exactly what the X-37B is doing is a secret. The Air Force insists the X-37B, built by Boeing in its soon-to-be-closed Huntington Beach facility, is meant only for conducting orbital science experiments in its pickup-bed-size cargo bay, but analysts say the X-37B is capable of much more than that. It could be an orbital spy. It could even be used to sneak up on and tamper with enemy satellites. It could haul small batches of supplies to the International Space Station. In October, Boeing program manager Art Grantz proposed to build an enlarged X-37C model that could also carry astronauts to the station, filling a gap left by the retired NASA Space Shuttle.

Whatever it’s up to, the X-37B will be doing it longer than anyone imagined when the diminutive spacecraft launched atop an Atlas rocket for the first time in April last year. The Air Force said last year that the X-37B could last nine months in orbit before its power and fuel ran out. (In comparison, the longest manned shuttle mission lasted just 17 days.) In October, Air Force program manager Lt. Col. Tom McIntyre said an extension might be possible. Now it appears the Air Force is taking it day by day, carefully monitoring the X-37B “as it sips power and fuel like a Prius,” in the words of one source involved in the development of military spacecraft.

“It’s working so well that they are thumbing their noses at everyone else as they break their own records, and rightly so,” the source said of the Air Force.

The Air Force “gets greedy on X missions,” the insider added, using shorthand for “experimental” missions. In other words, the flying branch will want to squeeze every ounce of utility out of a unique spacecraft. The insider said it’s also possible that another spacecraft — a satellite, most likely — is slated to take over some of the X-37B’s duties once the space plane lands. If that satellite got diverted for emergency use over, say, Afghanistan, then the X-37B would need to stay in orbit longer.

It’s not clear how long the X-37B might hold out. Once in space, the airplane-shaped X-37B unfurls solar panels to soak up the sun’s energy, stretching its power supply. But there’s no way to top off the onboard rocket fuel that allows the vehicle to maneuver. All the same, careful planning could extend the mission to a full year, in theory. “It could be on station into April for all I know,” the insider told Danger Room.

That would really be something to brag about.

Read 2979 times
Published in News Technologique-Tech News
More in this category: « Google, VMware, and Cisco Throw Money at Puppet New Twist in the Search for Dark Matter »
back to top