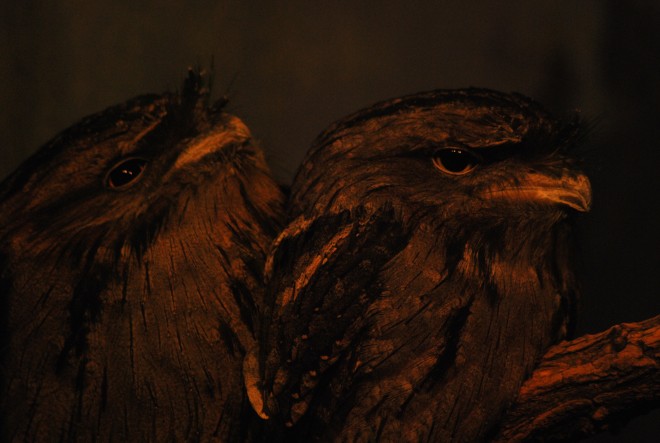 Frogmouths are not especially cheerful-looking birds. During the day, these nocturnal avians mostly look like feathery bumps on a log. The first one I ever saw, perching in the Bronx Zoo’s aquatic bird house, was so stock still and serious-looking that for a moment it seemed as if the keepers had simply placed an inanimate representation of the bird behind glass.

Of course, frogmouths probably look so strange to me because there is nothing quite like them in North America. Today these peculiar birds are found in a swath of tropical habitats from India through southeast Asia to Australia. But this hasn’t always been the case. Thanks to a exceptional specimen of an enigmatic bird from the Eocene shale of Wyoming, we now know that frogmouths once lived in prehistoric North America. The big-mouthed birds haven’t changed all that much in 50 million years.

The paper identifying the deep history of the frogmouths was published today by paleontologists Sterling Nesbitt, Daniel Ksepka, and Julia Clarke in PLoS One. Befitting a group of birds well known for their capacious maws, the fossil avian in question has a mouthful of a name –- Fluvioviridavis platyrhamphus. This is not a brand new species. Fossil bird specialists Gerald Mayr and Michael Daniels described the bird a decade ago on the basis of a nearly complete skeleton found in the famous Green River Formation of western North America. Frustratingly, though, some of the telltale anatomical features that would have allowed for the identification of the bird were poorly preserved or obscured. Mayr and Daniels could not conclude exactly what kind of bird the fossil represented. 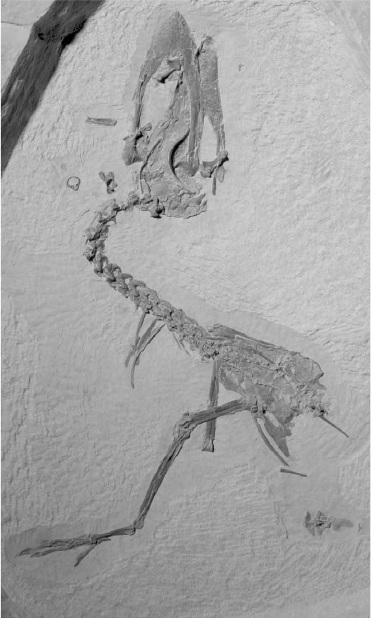 According to Sterling Nesbitt, lead author of the new study, the identity of Fluvioviridavis did not get any clearer with subsequent study. Initially, Nesbitt said, “It was identified as a ‘higher-land bird’ with unclear affinities,” but later the bird “bounced around the tree a bit in the controversial ‘metaves.’” (The Metaves is a proposed but disputed group of birds which could contain hoatzins, flamingos, grebes, and other lineages that are difficult to place.) Thanks to a new specimen and analysis, however, it seems that Fluvioviridavis can finally settle down.

The new Fluvioviridavis fossil at the center of the new study was found in roughly 51-million-year-old strata which preserve the remains of a prehistoric lake. (The long-lost body of water is itself called Fossil Lake.) This place has yielded more bird specimens than any other of the prehistoric lakes in the Green River Formation, and represents a time when southwest Wyoming was covered in warm, subtropical forests. “Interestingly,” Nesbitt said, “the environment [where Fluvioviridavis lived] in the Eocene in North America was similar to where [frogmouths] live today in east Asia and Australia.” And, significantly, many of the birds found in these Eocene sediments are members of stem lineages –- they are the early relatives of modern groups of birds and provide some insight into how avian groups took off.

What made the new fossil so special was that some critical features which were obscured in the originally described specimen could now be seen. These features were noted and added to the list of characters for Fluvioviridavis, and these, in turn, were run through a phylogenetic analysis which combined anatomical traits among a variety of birds with molecular data to create a big-picture view of avian relationships. Fluvioviridavis came out on the stem lineage for frogmouths, or, in other words, was an archaic form of frogmouth which fell closely outside the group which contains all living frogmouths.

Despite the position of the fossil frogmouth near the base of its respective family tree, though, the bird was quite similar to its living cousins. “[T]he classic frogmouth cranial features seem to have appeared early in the evolutionary history of the group,” Nesbitt said, though he noted that some of the postcranial features did not follow suit. For example, the lower part of the bird leg –- the tarsometatarsus -– was short in Fluvioviridavis but is long in living frogmouths. Still, the similarities between the skulls of the fossil and living frogmouths may allow paleontologists to infer how the extinct form made a living. “The unique skull features in frogmouths today allow them to beat their prey with their beaks,” Nesbitt noted, “and, consequently, it is possible that this behavior was present in fossil forms.” If this is correct, small amphibians, lizards, and mammals may have been on the menu for Fluvioviridavis.

The Green River Formation’s frogmouth wasn’t the only bird of its kind to have existed outside the range of its modern-day relatives. Masillapodargus, another stem-frogmouth, was previously described by from the roughly 47-million-year-old Messel oil shales of Germany. Though Nesbitt and colleagues hypothesize that frogmouths were never abundant in their sub-tropical environments, the birds appear to have once had a much wider spread through the northern hemisphere. When viewed through the lens of Deep Time, then, today’s tropical environments are a kind of museum where lineages that were once more widespread are now preserved.

Top Image: A pair of tawny frogmouths at the Bronx Zoo. Photo by the author.