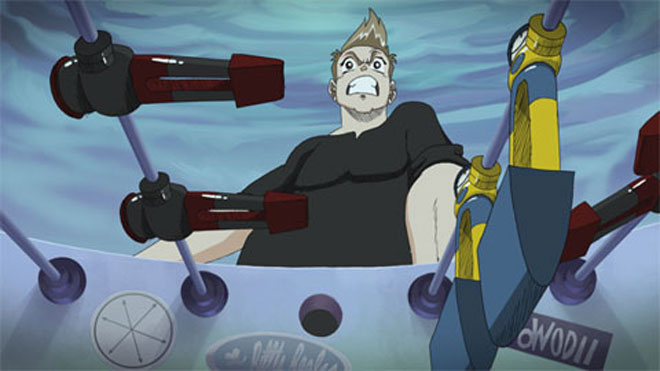 Cartoon Brew published this image and others, saying they will appear in an anime sequence in Thursday's episode of Community.
Image courtesy Cartoon Brew

Continuing a streak of awesomeness that is apparently unstoppable, Thursday’s episode of Community will feature an anime sequence.

According to Cartoon Brew, it’s a retro anime bit created by Titmouse, and (apparently) has something to do with foosball. Could this sound any more rad? No, not really.

Not only does it sound good, those who have seen the episode call it a crowd pleaser, according to show creator Dan Harmon.

“Tonight’s episode is loved by both myself AND [the show's studio] Sony,” Harmon tweeted Thursday morning. “Those margins bracket everyone on Earth and some cats, so I think you will enjoy.”

As for other details about “Foosball and Nocturnal Vigilantism,” IMDb notes that the episode involves some kind of battle uniting Jeff (played by Joel McHale) and Shirley (Yvette Nicole Brown) against a group of arrogant students who commandeer the foosball table at Greendale Community College, where the show is set. Based on the few leaked images we’ve seen, it seems this battle is what’s given the anime treatment.

We didn’t think Community could get any better/nerdier after the three-year-long Beetlejuice gag and the infamous paintball episode, but this anime thing just might be in the running. We’ll find out soon. There are only a few episodes left in the season before the series gets replaced by 30 Rock in January, so enjoy it now. (We beg you.)

Community airs Thursday at 8 p.m./ 7 p.m. Central on NBC. Head over to Cartoon Brew for more images from the anime sequence.

Read 2767 times
Published in News Technologique-Tech News
More in this category: « WikiLeaks Unveils the Selling of Surveillance, Sort Of Environmental Gap Widens in Phoenix »
back to top