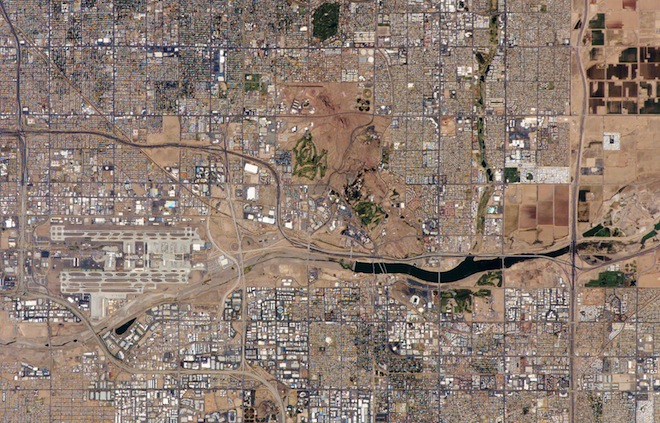 It’s not only economic inequality that’s increased in the city of Phoenix, Arizona. In the last 40 years, environmental inequality has increased, too.

The availability of foliage and vegetation — and the cooling effects they provide — now tracks with income. In 1970, there was no relationship.

In a study published in Ecological Applications in October, researchers led by Jenerette and urban ecologist Chris Martin of Arizona State University crunched census data and satellite imagery of land use, plant cover and temperature in Phoenix between 1970 and 2000.

Over that time, central Arizona became hotter and drier, conditions that appear to be a new regional norm. Phoenix, one of the fastest-growing cities in the United States, expanded in population from about 580,000 to 1.3 million. Average incomes rose, but also became more disparate. 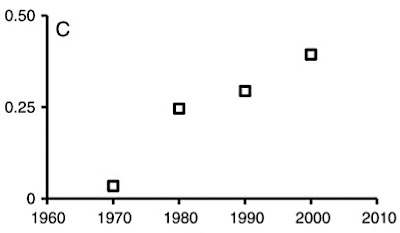 Changes from 1970 to 2000 in the amount of correlation between income and local vegetation. Image: Jenerette et al/Ecological Applications

That money buys tree-lined streets and parks and open spaces isn’t a new story, of course. What makes the new study notable is the change over time.

On an income-and-vegetation correlation scale of 0 to 1, in which 0 is the absence of any link and 1 is access to trees as a direct reflection of income, Phoenix went from 0 to 0.4 in 30 years. “These patterns document a gradual concentration of vegetation into higher-income neighborhoods compared with lower-income neighborhoods,” wrote Jenerette and Martin.

In central Arizona, vegetation isn’t simply a pretty natural adornment. According to Jenerette and Martin, the shade under a tree can be 40 degrees cooler than a patch of bare soil. A large body of research links increased urban temperatures to health risks, exacerbated pollution and violence.

Exactly how what Jenerette and Martin call the “urban heat riskscape” translates into quantifiable health and social costs remains to be determined, said Jenerette. “We really want to know,” he said. “Right now, we’re just highlighting that there is an important intersection here.”

According to Stephanie Pincetl, director of the Center for Sustainable Urban Systems at the University of California, Los Angeles, more research is needed on how this inequality emerged. “To draw attention to the inequity is important,” she said. “The question is, why did it happen?”

A more immediate question is whether this environmental inequity can be fixed. Jenerette suggests Phoenix plant more trees and provide more parks, a recommendation that applies to most cities. But Pincetl cautioned that municipalities, already short of money, often rely on property owners to maintain city trees.

Lower-income residents may not have the resources necessary, and — as in Milwaukee — housing market inequalities can end up reproduced in reforestation programs. In Los Angeles, the Million Tree Project has proved far more difficult to coordinate than anyone envisioned.

As a simple first step, Pincetl recommended that routine infrastructure improvements be made with sustainability in mind. “Changing the surface colors of streets and sidewalks, requiring all roofs to be white, could also reduce the heat load,” and don’t represent an extra cost, Pincetl said. “Instead of perpetuating the system you have, move the fixed urban infrastructure towards something more sustainable.”

Image: The Phoenix-Scottsdale-Tempe conurbation photographed from the International Space Station in 2006. (NASA)

Read 3038 times
Published in News Technologique-Tech News
More in this category: « Anime Sequence Will Make Community Even Geekier Feds' Anti-Piracy Vid Is Reefer Madness for the Digital Age »
back to top