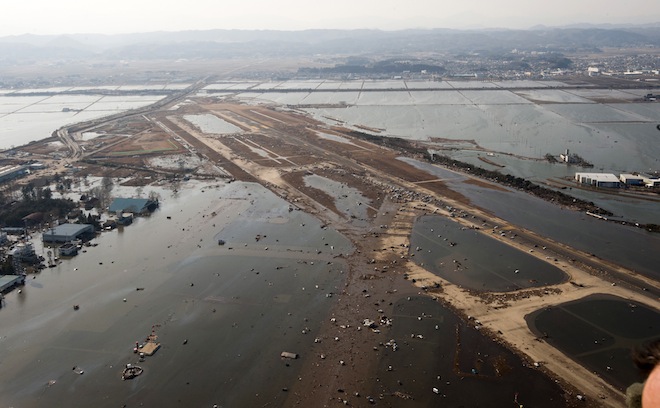 Disasters are supposed to teach people valuable lessons. But new research shows that following the Tohoku earthquake and subsequent tsunami on March 11, 2011, Japanese residents have become less likely to evacuate during a dangerous event.

“A gigantic tsunami did not teach a lesson to the public, leaving people more vulnerable than before,” said Satoko Oki of the University of Tokyo’s Earthquake Research Institute who presented the findings Dec. 5 at the 2011 American Geophysical Union meeting.

The magnitude 9.0 Tohoku earthquake and tsunami — the largest in Japanese history –- were responsible for more than 15,000 deaths and an estimated $210 billion in property damage.

After the 2010 Chilean earthquake, almost exactly one year before the Tohoku disaster, Oki asked Japanese residents a set of questions related to tsunami preparedness. At the time, roughly 70 percent correctly identified that a 10-foot tsunami is a hazard and 60 percent said they would evacuate in the event of one that tall. Even 1.5 feet of swiftly moving water can carry a person off and drown them, and waves only 6.5 feet high can wash away or destroy wooden houses.

But when the same questions were asked again one month after the Tohoku disaster, the numbers had nearly halved. Only 45 percent of respondents knew that a 10-foot tsunami was hazardous and only 31 percent said they would evacuate if they heard a warning that one was coming. People mostly misidentified a 16-foot tsunami as the point at which to evacuate. Such public perception could become dangerous in the case of future earthquakes and tsunamis.

Oki speculated that the reason for the strange result has to do with a psychological effect called the anchoring heuristic. “Laypersons are highly inclined to make a judgment based on previous information given to them,” she said.

The effect holds even if the information is unrelated. The size of the number seems to be the important factor. For example, if people are first told that 1,100 people die every year from electrocution, and then asked to estimate the total causalities from floods they will provide a lower answer than people who are first told that 10,000 people are killed in car accidents each year. The higher number becomes an “anchor point,” prompting higher estimates.

With a month of Japanese headlines over and over exclaiming at the record-breaking 130-foot tsunami, the public’s approximations of dangerous tsunami heights inched upward. The solution, Oki said, is to include proper information alongside the enormous tsunami figures. News reports could save future lives if they added one phrase: a 6.5-foot tsunami could wash away your house.