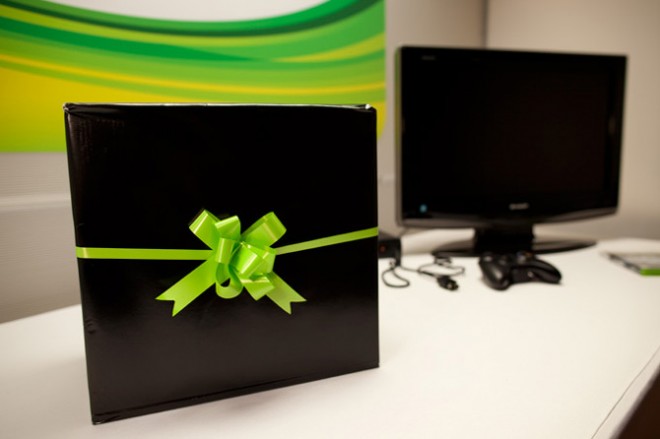 Microsoft isn’t going to let Apple and Google take over your living room without a fight.

Via updates to its Xbox Live service, Microsoft will be adding a slew of new TV, movie, sports and news hubs to its Xbox hardware, as well as unifying its gaming and mobile product lineups with a common user interface. And, yes, there’s an app for that: Along with the new content options, which begin rolling out Tuesday, Windows Phone users will be able to download a free app that lets them control their Xbox 360s, as well as find, and learn more about, Xbox Live content.

The app, named Xbox Companion, is the first mobile app to directly tie into a videogame platform, and gives existing Xbox owners a compelling reason to buy a Windows Phone — you know, with all the money they save from not buying a set-top box like Apple TV or Google TV.

Indeed, remote control apps are fun and convenient, but when it comes to living room entertainment, consumers want more content sources, and, to this extent, Microsoft’s new Xbox Live initiative would seem to deliver.

Microsoft is teaming up with a number of big-name content providers to expand Xbox Live entertainment options over the next few months. Tomorrow, Xbox Live users in the United States should see new integration with Netflix, Hulu Plus, ESPN and MSNBC, and in December, hubs for UFC, VEVO, TMZ, YouTube and Vudu should join the club. Sometime in 2012, hubs for MLB.TV, HBO Go, CinemaNow and Xfinity On Demand are slated to hit Xbox Live. (All of these hubs represent just U.S. offerings. Xbox Live users in other parts of the world will receive their own unique options.)

The Xbox Companion app is powered by Microsoft’s Bing search engine. With it, you can search (and ultimately purchase) the entire Xbox Live catalog of TV shows, movies, music, games and apps on your Windows Phone device. Once you’ve searched a title, you can find out more information about it, and launch it on your Xbox from your handset, controlling it with the usual play, pause, rewind and fast forward functions we’re all used to.

You can also use Xbox Companion to navigate through the Xbox interface. It will show you recently launched apps and games, as well activity from your friends, such as who’s online, what they’ve played recently, and their game-related achievements.

And if you’ve got a Kinect, you’ll be able to use improved voice control features to find and select content, too. 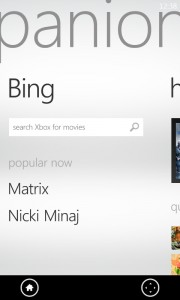 Microsoft will also be revamping the Xbox interface to borrow from its Metro UI look-and-feel this month. Windows Phone and many of its apps are based on Metro, and Windows 8 will adopt Metro when the OS debuts in 2012. Having a unified user interface across its entire consumer electronics catalog will make it easy — and enticing — for consumers to stick with an all-Windows lineup.

Thus far, Apple has come closest to offering such a unified experience across different devices. Apple’s Remote app lets you use your iPhone, iPad or iPod touch to control what you’re watching on its Apple TV set-top box, as well as control iTunes on a Mac. If rumors of an Apple-branded TV set prove true, Apple could further integrate iTunes, iCloud and possibly iOS in a larger way.

Other hardware manufacturers have created smartphones apps for controlling their devices. For example, owners of LG smart TVs, Blu-ray players, and smart TV upgrade boxes can use the LG Remote app — for iOS or Android — as an alternative to the remote that shipped with the device.

But now Microsoft offers essentially the same service, along with broadened entertainment options, across smartphones, game consoles, notebooks and desktop computers. It would appear, on paper, to be a killer combination.

“Microsoft has not only built the right experience, it has ensured that it will spread quickly and with devastating effect,” Forrester analyst James McQuivey wrote in a blog post Sunday about these new Xbox-related developments.

Xboxes are already 57 million households worldwide, so the decision to update such a gigantic installed base is a shrewd move on Microsoft’s part. Nonetheless, it remains to be seen whether the Xbox can juice the Windows Phone platform, which could use a serious boost in adoption.