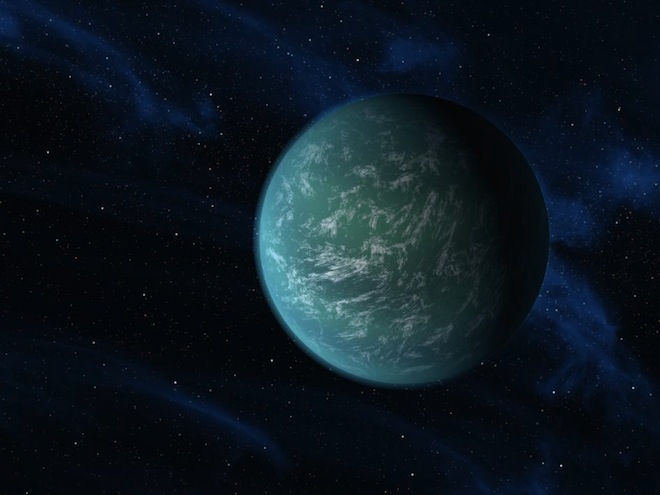 For the first time, astronomers have found a planet smack in the middle of the habitable zone of its sunlike star, where temperatures are good for life. “If this planet has a surface, it would have a very nice temperature of some 70° Fahrenheit [21°C],” says William Borucki of NASA’s Ames Research Center here, who is the principal investigator of NASA’s Kepler space telescope. “[It's] another milestone on the journey of discovering Earth’s twin,” adds Ames director Simon “Pete” Worden.

Unfortunately, the true nature of the planet, named Kepler-22b, remains unknown. It is 2.4 times the size of Earth, but its mass, and hence its composition, has not yet been determined. “There’s a good chance it could be rocky,” Borucki says, although he adds that the planet would probably contain huge amounts of compressed ice, too. It might even have a global ocean. “We have no planets like this in our own solar system.”

Kepler-22b is 600 light-years away. Every 290 days, it orbits a star that is just a bit smaller and cooler than our own sun. The Kepler telescope, launched in 2009 to scan the skies for Earth-like worlds, found the planet because it sees the orbit edge on. That means that every 290 days, the world transits the surface of the star, blocking out a minute fraction of its light.

Borucki likes to call the new discovery the Christmas planet. “It’s a great gift,” he said at a press conference here this morning. “We were very fortunate to find it.” The first of the three observed transits occurred only days after Kepler started observing. The third one was seen just before Christmas 2010, shortly before the spacecraft was unable to carry out any observations because of a technical glitch. Says Borucki: “We could’ve easily missed it altogether.”

“There are two things really exciting about this planet,” adds Natalie Batalha, Kepler’s deputy science team leader. “It’s right in the middle of the habitable zone [the region around a star where temperatures are neither too high nor too low for liquid water to exist], and it orbits a star very similar to our sun.” Previously discovered “habitable” planets orbited dim, red dwarf stars, or they were located at the edge of the habitable zone, with more extreme temperatures.

At the press conference, which marked the start of the five-day First Kepler Science Conference here at NASA Ames, Batalha also announced 1,094 new planet candidates found by Kepler since February 2011, bringing the total to a whopping 2,326. So far, only 29 of these (including Kepler-22b) have been confirmed to be genuine planets, but Kepler scientists have good reasons to expect that at least 90% of all candidates will turn out to be real.

Forty-eight of these planet candidates orbit in the habitable zone of their parent stars. Most are substantially larger than Earth, but 10 are about the same size as our home planet. Some of these are in multiplanet systems. “It’s conceivable that any — or many — of these 48 habitable zone candidates, or their moons, could have life,” Borucki says.

Jill Tarter of the SETI Institute in Mountain View, Calif., says the habitable Kepler planets are prime targets for the Search for Extra-Terrestrial Intelligence (SETI), carried out with the dedicated 42-dish Allen Telescope Array in Northern California. “We’re taking everything we can get from our Kepler colleagues to look for techno-signatures” that might betray the existence of an alien civilization, she says.

So far, the question about extraterrestrial life is very much open. “We don’t know whether Earth as it is, and life as we know it, is very unusual or very common,” Tarter says. However, if scientists find a second place in the universe where life once got started, it will be obvious that life must be widespread. Says Tarter: “In this field, the number two is important. We count one, two, infinity.”