Grafting an alien invasion onto a classic Western gave the makers of Cowboys & Aliens plenty of opportunities to blow stuff up, even as the movie’s hostile extraterrestrials blew the humans’ minds. 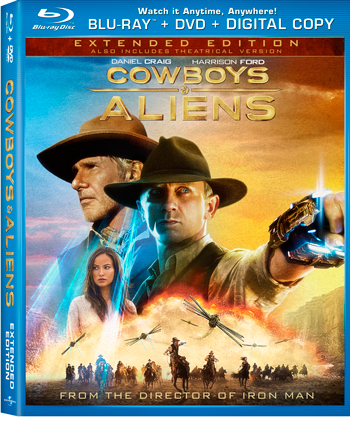 Director Jon Favreau describes the earthlings’ first baffling encounter with the aliens in this bonus clip from the Cowboys & Aliens Blu-ray, out Tuesday.

“There’s a progression in the action sequences,” Favreau says. “First time we encounter the aliens, it’s nighttime in this Old West town, we have all of our lead characters here and then slowly, on the horizon, the lights come. And then before they know it, they’re upon them, blowing things up, snatching people.”

Using lots of practical effects, the filmmakers proceeded to blow the crap out of the dusty Western town as stars Daniel Craig, Harrison Ford and Olivia Wilde put up the best fight they could. See how they pulled off the explosive action in the clip above.

Wired.com is giving away five copies of the Cowboys & Aliens Blu-ray/DVD combo pack (list price $35). To enter, leave a comment below telling us your favorite alien-invasion movie and why you think it’s the best of all time. Five winners will be chosen at random. Entries must be received by 12:01 a.m. Pacific on Dec. 13, 2011.

Read 2942 times
Published in News Technologique-Tech News
More in this category: « Reliving the Momentous 1882 Transit of Venus More Evidence Found for Quantum Physics in Photosynthesis »
back to top