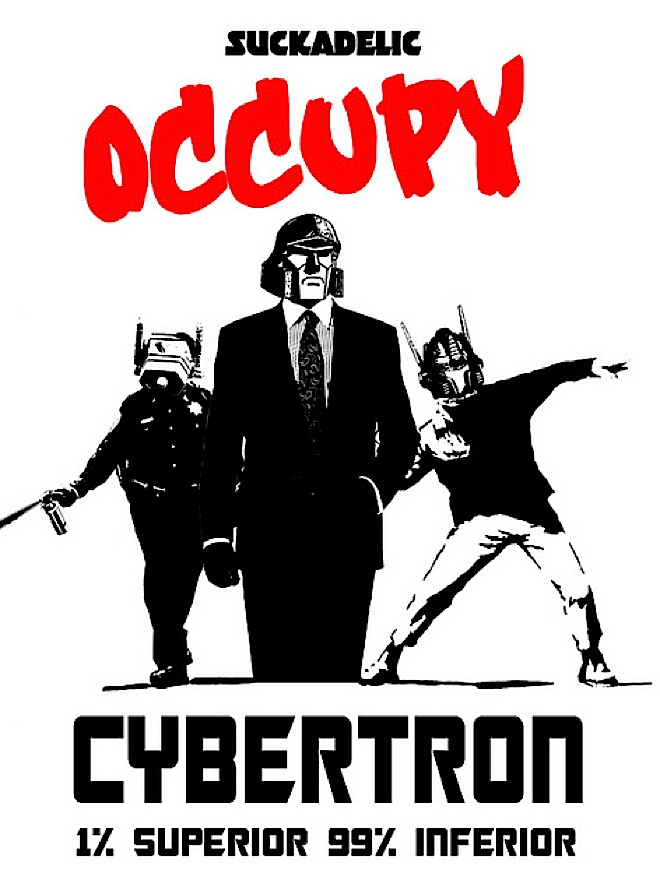 For one night only, 99-percent Autobots take on 1-percent Decepticons in Sucklord's latest toy exhibit.

With Occupy Cybertron, toy prankster Sucklord splices the Occupy movement into the Transformers universe, with 99-percenter Autobots facing off against 1-percenter Decepticon overlords.

His latest batch of custom action figures, which will go on display Wednesday night in New York, place Decepticon heads atop the iconographic suits that have pulled the plug on the global market while skimming off obscene profits.

“I don’t claim to be part of Occupy Wall Street, to represent it or speak for it in any way, and I do not use the name directly in any of my offerings,” Sucklord, aka Morgan Phillips, told Wired.com in an e-mail. “This project is my exploration into the way occupation as a means of protest has taken over popular culture. By transposing the idea into the world of Transformers, it underscores the concept’s applicability.” 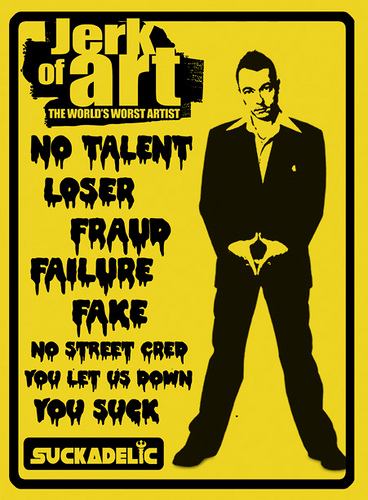 Sucklord calls himself a Jerk of Art so you don't have to.

“I thought long and hard and nearly pulled the plug on this release, for fear of running afoul of the movement,” said Sucklord, who previously created a gay Star Wars toy collection. “I’m squarely in the camp of the 99 percent, and I know it’s anathema to the movement to profit off of it, so I want to make my intentions clear before anyone makes any snap judgments.”

Sucklord’s knockoff Transformers gear will be joined by Occupy Cybertron trading cards created for the event; they will be handed out free to attendees dressed in relevant costumes.

That means you, unnamed dude who wears the Guy Fawkes mask over the Megatron armor. And probably you, too, whoever dresses up as someone from Sucklord’s ongoing web series Toy Lords of Chinatown.

“I think this could be helpful to the movement, because the sci-fi toy nerds of the world who have thus far sat out Occupy Wall Street may see how it relates to them, now that it has been presented in a language they can understand,” Sucklord said, with what could only be described as a virtual straight face. “Perhaps I’m giving myself too much credit for having any influence, but I feel I can help spread it into non-physical spaces and get its ideas out to other groups.”