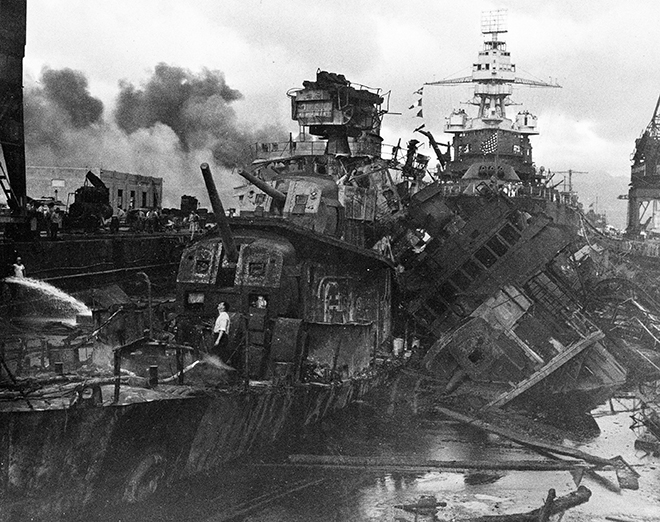 This December 1941 file photo shows heavy damage to ships stationed at Pearl Harbor after the Japanese attack on the Hawaiian island on Dec. 7, 1941. Associated Press/US Navy

1941: Air raid, Pearl Harbor. The Japanese, concluding that war with the United States is inevitable, attempt to knock out the U.S. Pacific fleet based in the Hawaiian Islands at Pearl Harbor.

Japan knew it could not defeat the Americans in a conventional war, lacking as it did sufficient manpower and raw materials (notably oil) for such a sustained effort. By destroying the U.S. fleet all at once as war began, the Japanese were gambling that they would be able to complete their Asian conquests before the Americans could recover.

A successful raid, the Japanese believed, would delay America’s entry into the war by months, if not years. Faced with the reality of an unassailable Pacific empire, the Americans might then choose negotiation over fighting.

Minoru Genda, one of the Imperial Japanese Navy’s most innovative officers, was the primary architect of the Pearl Harbor raid. Success, he knew, could only be achieved through total surprise. Relying on carrier-based dive bombers, fighters and torpedo planes, his targets included not only the ships anchored at Pearl but the nearby airfields and oil storage facilities.

Observing strict radio silence, the Japanese task force put to sea Nov. 26 and steamed undetected to within striking distance of the Hawaiian Islands. The first wave of attackers left their carriers upon receipt of the signal “Climb Mount Niitake” and were guided in by picking up the signals from a Honolulu radio station.

Early on a Sunday morning, Pearl Harbor was not exactly on combat alert even though the Americans knew — from having broken the Japanese codes — that an attack somewhere was imminent. They never dreamed an attack would come this far east, however. When a couple of radar operators working a test problem near Pearl reported a huge blip headed their way, they were essentially told to forget about it.

The attack unfolded almost exactly as Genda had drawn it up and might have succeeded strategically, too, if the American aircraft carriers had been in port on Dec. 7. As it was, the three carriers were at sea that day and escaped unscathed, a fact that would come back to haunt the Japanese seven months later at Midway.

The raid must be considered only a partial tactical success as well. Surprise was achieved, and the American fleet took a beating, particularly the battleships. The major airfields were put out of action, and most of the planes were destroyed on the ground. But the Japanese failed to get the carriers — which would prove to be the decisive weapon of the Pacific war — and also committed a major blunder by failing to destroy the oil reserves on Oahu, reserves that would have taken months to replenish from mainland refineries.

A third wave was to have attacked these tank farms, along with U.S. Navy machine shops, stores and administrative centers. But the commander of the Japanese task force, Vice Adm. Chuichi Nagumo, cancelled the third wave and withdrew, fearing that his own ships were vulnerable to an American counterattack.

Read 7831 times
Published in News Technologique-Tech News
More in this category: « With Occupy Cybertron, Sucklord Puts Decepticons in Suits A Google-a-Day Puzzle for Dec. 7 »
back to top