If there were an urban myth that suburban homes are impervious to becoming cannon fodder, it just got busted.

Two homes, a sidewalk and a van all took fire after a test for the show MythBusters went awry Tuesday and sent a cannonball out of a bomb range and into a nearby residential neighborhood in Dublin, California.

The cannonball, which took an unexpected bounce off a safety berm during the test, traveled 700 yards outside of the Alameda County Sheriff’s Department bomb range where it was fired, hit a sidewalk, crashed through the front door of a home, traveled upstairs and went through the bedroom of a sleeping couple.

“They didn’t actually hear the cannonball come through the house, what woke them up was the settling of the sheetrock,” Alameda County Sheriff’s Department spokesman Sgt. J.D. Nelson told reporters after the incident.

MythBusters, the Discovery Channel show where hosts Adam Savage and Jamie Hyneman prove the validity (or lack thereof) of various commonly held beliefs, was running the test to determine if other materials could be fired from a cannon and have the same effect as a regular cannonball, Nelson said.

The cannonball didn’t stop in the sleeping couple’s bedroom. After leaving a 10-inch hole in their wall, it crossed four lanes of traffic and bounced off the roof of Ming Jiang, whose mother was watching his 10-month-old son inside his house. 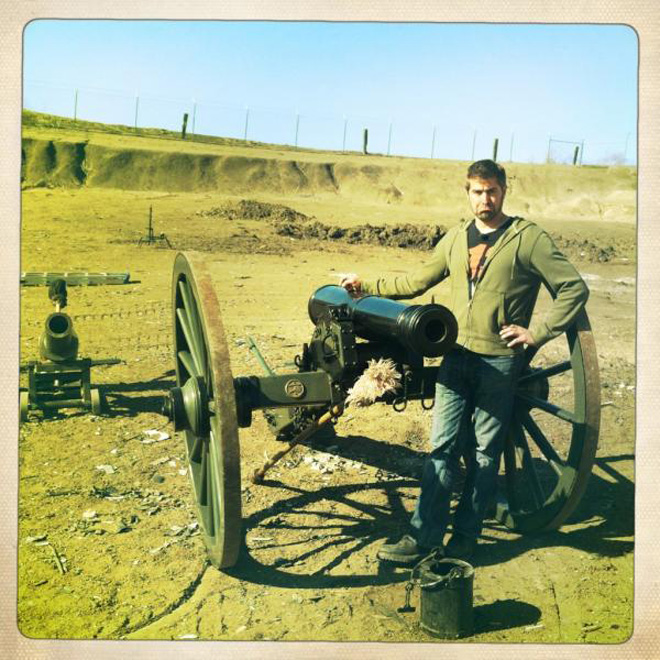 This photo of MythBusters' co-host Tori Belleci with two cannons was tweeted, then deleted.

“She had no idea what was going on — it was a very loud boom,” Jiang told reporters. “She thought a tree fell, or maybe a meteor, but it was not clear it was some cannonball that landed on a roof.”

The projectile finally crashed through the window of a minivan and landed in the vehicle. Surprisingly, no one was injured in the incident. Nelson told the San Francisco Chronicle that MythBusters had used the San Francisco Bay Area bomb range without incident for more than 50 episodes.

According to a statement released by the Discovery Channel to Wired.com, Nelson is an explosives expert for the show and was on site for the test. “All proper safety protocol was observed,” the statement said, adding that the show’s producer, Beyond Productions, “is currently assessing the situation and working with those whose property was affected.”

Prior to the incident, show co-hosts Tory Belleci and Kari Byron had apparently tweeted images of themselves with various cannons, but those images have since been taken down. However, the photos have been posted online.

Check out more details in the video above. If you need us, we’ll be over here trying to get that Breeders song unstuck from our heads.

MythBusters airs Wednesdays at 9 p.m. on the Discovery Channel.

Read 3642 times
Published in News Technologique-Tech News
More in this category: « Facebook Updates Its Android App for Speed and Features 3 Wired Science Bloggers Honored in Best-of Anthology »
back to top