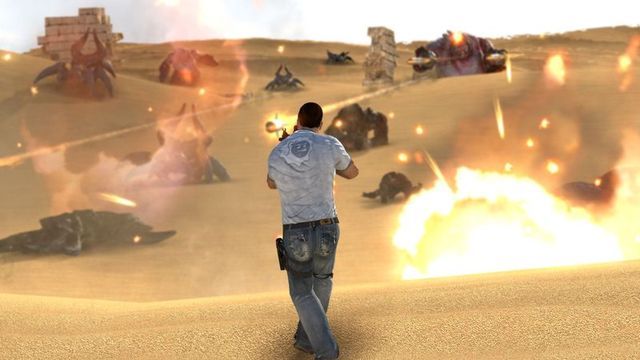 Serious Sam 3 is a classical first-person shooter, much like the first two games of the series, or even something like Painkiller. You are a man who can carry a large number of guns, and you are presented with a series of bad guys you need to kill with those guns. You’ll see many weapons return from the previous games in the series, along with a few new guns that are still familiar from other video games. There are no wheels being reinvented here; the developers at Croteam clearly want you to understand each weapon the second you see it in the game.

Things begin slowly, and the first level or two could even be described as boring. The level design is frustrating in places, and I found myself getting lost once or twice in the first few sections, which shouldn’t happen in a game this linear. I also bumped into a clipping issue or two, and the cut-scenes don’t look as good as we’re used to in modern PC gaming.

These are small nits I’m picking, however, as the experience comes to life when the enemies begin to fly at you in waves and you feel the relentless rhythm of the game. Serious Sam 3 is unique in the current market of action games; it’s willing to throw everything it has at you, all the while cackling madly. Don’t be afraid to kick the difficulty down or to take a break if you become frustrated, but also be aware that finishing each section will give you the same well-earned sense of satisfaction you may recognize from games like Dark Souls.

Serious Sam 3‘s design is reminiscent of 2-D shoot-em-ups. Each enemy moves and attacks in set ways, and the game sends them at you by the dozens—and sometimes by the hundreds. The waves of enemies will cause you to move and fire in certain ways to avoid damage, and when you begin to feel comfortable, the game will layer on another kind of enemy. You’ll run backward, circle-strafe, allow the bad guys to take each other out, and of course keep an ear out for the headless monstrosities that run screaming at you until they explode. You need to have a strong headset or speakers for this game, as it’s absolutely necessary for you to be able to hear where the enemies are in relation to your character. Stereo speakers are good, but surround sound is better. Trust me, the audio cues are important.

What’s clear is that everyone involved with the game spent a large amount of time working on the design of the levels. A lot of thought went into the enemies’ attacks—where they come from, in what order, and how many in each wave. The enemy placement and movement is conducted like instruments in a symphony. It’s a wonderful thing to play, even as you’re cursing the game’s difficulty. That’s why this is more like a shoot-em-up than a first-person shooter: the enemy placement and waves are what makes the game special, with each seemingly simple enemy being used to its maximum effect. Each type of bad guy is relatively easy to deal with and destroy, but when you’re forced to layer your strategies on top of each other as you fight multiple kinds of bad guys at the same time, and then more warp in, things become frantic. You’ll find yourself getting into a rhythm-game like zone, and that’s a wonderful feeling.

The game also provides a wealth of options that used to be common in PC games, but are now worth pointing out in reviews. You can change the behavior of weapon autoselect to “never,” “always,” “only if new,” or “only if stronger.” You can play in a third-person view if you prefer. You can turn the camera bob on or off. You can change the crosshair, and you have a wealth of fun options for blood and gore. You can even change the weapon autoselect behavior to be different in single- and multiplayer. You can adjust the field of view, show the frames-per-second, turn the HUD off… the list goes on. Nearly everything can be tweaked and adjusted, which is right and proper.

Of course, there is also a full suite of multiplayer options, including up to 16-player co-op through the campaign, a survival mode where the game simply throws enemies at you until you succumb, and modes such as the expected deathmatch and one-hit kill, where a single bullet takes you out. There are a number of ways to play online with friends or enemies, and some of them are pretty damn fun. A fair warning, however: some of the more obscure game modes seem to be empty, with little server support.

If you have a deep love of classical first-person shooters or enjoy games that deliver pure action, it doesn’t get much better than this, especially with the wealth of options offered for play. You can save at any time, and you’ll want to use that option if you’d like to get ahead. Some players are going to be turned off by the difficulty or the game’s simple design, but even more are going to fall in love with a developer’s mastery of this genre.

Welcome back, Sam. We missed you.