Microsoft revealed Tuesday one of the key components that will be shipping with its upcoming Windows 8 platform: the Windows Store. The new software portal will launch in late February alongside the beta of Windows 8, selling applications ranging in price from $1.49 to $999.99.

To an installed base of 500 million-plus Windows users, the Windows Store presents a whole new world of software discovery and consumption. And to would-be app developers, the new platform splits the difference between the wild, woolly Android Market (where anyone can set up shop, but getting noticed can be difficult) and the much more controlled, heavily monitored Apple App Store (whose dev policies are relatively stringent, but great riches await successful developers).

Windows 8’s potential audience portends to be a key ingredient in any Windows Store success story. iOS has a user base of approximately 152 million, and Android’s is about 247 million — but that’s still half of what Microsoft can potentially reach when it begins dangling Windows 8 to every current Windows user worldwide.

“The reach of the Windows Store is very exciting, as is the ability to create an app that will run on all Windows 8 devices — desktops, laptops and tablets,” says Sina Mobasser, co-founder of BarMax, a $1,000 app that helps law students prep for bar exams. “For comparison, we would need to re-develop BarMax if we wanted to sell it in the Mac App Store.”

To lure in would-be developers, Microsoft is establishing an attractive revenue-split model that trumps what Apple delivers to its App Store and Mac App Store software partners. The Microsoft split starts at 70-30, between developers and Microsoft, respectively. This is the same ratio Apple offers, but once an app has proven its success by garnering $25,000 in sales, the split shifts further in the developer’s favor to 80-20. 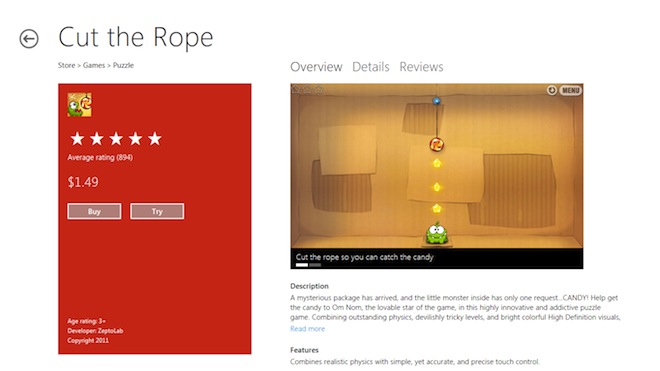 Rather than requiring 'lite apps' that you eventually upgrade, the Windows Store will offer free trials of apps. Image: Microsoft

Another difference between the Windows Store model and existing app stores is that users will often be able to download free app demos to try out software before making a purchase. Now, of course, Android and iOS offer “lite” or “free” app versions, which users can upgrade to more feature-rich versions, or versions that, say, eliminate in-app advertising. But in Microsoft’s scheme, developers can bake in time-limited free trials, giving users a complete taste of the full app version, all without a separate download.

For Windows 8, developers will also be able to use a wide variety of familiar coding platforms to build their apps: HTML 5 and JavaScript, as well as languages like C, C++/Java, C# and Visual Basic.

“It’s actually easier to develop apps for Windows 8 than it is for iOS,” Mobasser says. “iOS apps are built in Objective-C, which is a complex programming language. Windows 8 apps will be built in HTML 5 and JavaScript, two very well-known, popular, and standards-based programming languages that are utilized by most web sites.” 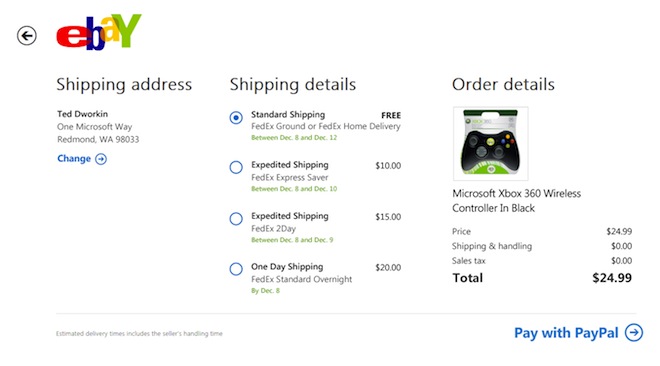 In this Windows 8 app, eBay uses its own payment platform rather than the one provided by Microsoft. Image: Microsoft

The final major feature of the Windows Store — for developers at least — should be the transparency of its app approval process. Specifically, Windows 8 includes a developer dashboard that shows a developer where his or her app currently resides in the approval pipeline. Microsoft will also provide developers with the same technical certification checks that the company itself uses to test an app, thus making it easier for a coder to verify that performance is up to par.

In his demo of the Windows Store, Antoine Leblond, Vice President of Windows Web Services, trumpeted the transparency and simplicity of the store’s admission rules. He said policies follow a few simple principles, and are “concise and clear.” Right now, the policies amount to about six pages of text — a tenable amount for the average person to digest.

Once an app has been published, the developer dashboard will provide publishers with a variety of useful statistics about their apps. Among other data, devs will be able to see the number of app purchases, revenue numbers, customer ratings, and crash reports (along with stack traces so developers will easily be able to identify and fix the most frequent types of crashes).

When the Windows Store opens with the beta launch of Windows 8 in late February, it will include only free apps that have been submitted by invitation only. However, Microsoft is holding a contest for developers to be among the first inside the store. Besides early store entry, Winners will get a free developer tablet (like the one that was given out at Microsoft’s Build Conference), and free Azure hosting for a year.