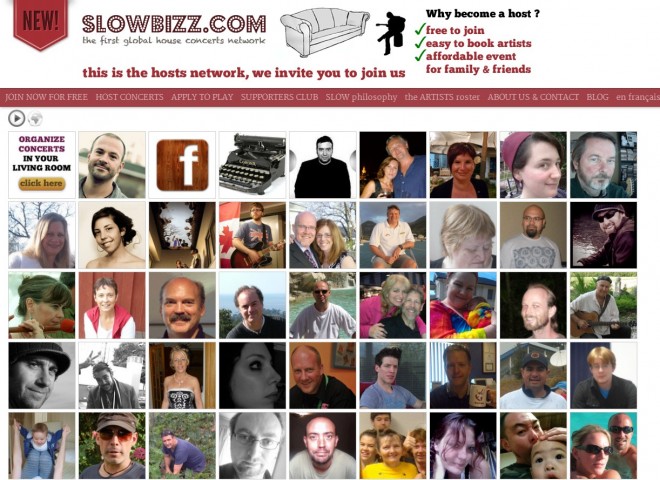 Innovative new service Slowbizz wants to make it easy for music fans to host their own shows.
Screengrab: Evolver.fm

If you’ve never had the pleasure of seeing musicians perform in someone’s home, you should try it some time. The beer is cheaper, the bathroom line shorter, and the audience (usually) more familiar.

A startup called Slowbizz aims to make that homey live music experience possible for more people by taking care of some of the logistics with a web app: a social network to help connect people who want to hold shows and the musicians who want to play them, and to keep the whole thing organized. Artists can apply to play, while hosts can check out their options for where to play.

In contrast to the “fast” world of Ticketmaster, e-mail blasts, parking fees and the various other forms of hustling that surround most shows, Slowbizz, which calls itself “the first global house concerts network,” hopes to embrace what it calls “slow movement” — the gradual accumulation of hosts and musicians (and of the connections between them) until it forms a viable way for artists to play more shows, and music fans to see and organize more shows.

Yes, it has long been possible to contact a band or their booking agent and try to get them to play in your house, assuming you can come up with the group’s minimum fee. We know one band that was paid to fly 11,000 miles round-trip to play some guy’s birthday party in Germany, for instance. Slowbizz should make such arrangements much easier though — to the point that you might consider actually doing it.

The service hasn’t launched yet, although you can already register as either a host or as an artist. Slowbizz founder Frédérick Tubiermont told Evolver.fm that he plans to launch the concert phase of Slowbizz once it has 1,000 active hosts. So far, it’s approaching 100, so there’s still a ways to go, although registration should pick up now that we and others are writing about it.

Hosts will be able to charge for concerts or offer them for free, using a system similar to Eventbrite. It might be a good idea to charge, because there’s a minimum fee if you want to book an artist to play your home.

“We expect [hosts] to guarantee the fee of $205, but they might want to recoup it totally/partially or to offer the evening to their guests,” explained Tubiermont. “Situations will vary.”

Aside from the sheer satisfaction of making something happen, hosts get “direct access to awesome artists, efficient promotional support [and] solid guarantees” for doing this through Slowbizz as opposed to trying to organize house concerts themselves.

What about safety? Do hosts need to be worried about people trashing their house or stealing things? Tubiermont doesn’t foresee problems there.

“The events will be open to family, friends and potentially to guests invited by family and friends,” said Tubiermont. “Even if the risk is small, we won’t be responsible for what’s happening at the hosts’ places, as we wouldn’t be responsible for a birthday party or an after-work party. It’s up to the host to accept/refuse attendees and to decide which scale he or she wants to give to the event — 10 people, 50 people, only family and friends, or open to some guests outside the first circle.”

For helping arrange the shows, Slowbizz plans to take a commission.

“The business model is very simple: We take a 30 euro commission [or its U.S. equivalent] on the 150 euro guarantee and a setup fee for a tour of [at least] 20 dates,” said Tubiermont. “This is the way we pay ourselves. In the future we will certainly introduce ancillary products/services offered both to the hosts and the artists. The Slowbizz model will also be applied to other verticals.”

For the most part, given the non-professionally amplified nature of most apartments (Slowbizz will concentrate first on urban areas) and homes, many of the artists currently listed are of the solo singer-songwriter variety, although that’s not a hard-and-fast rule. Still, if Slowbizz takes off, some artists will likely try a pared-down or acoustic setup.

If this sounds good to you, register as a host or as an artist — and if you end up throwing one of these in Brooklyn or Boston, please, give us a shout.

Read 2495 times
Published in News Technologique-Tech News
More in this category: « What Moore's Law Means for the Future of the Cloud The Demise of the Komodo Kings »
back to top