The Demise of the Komodo Kings 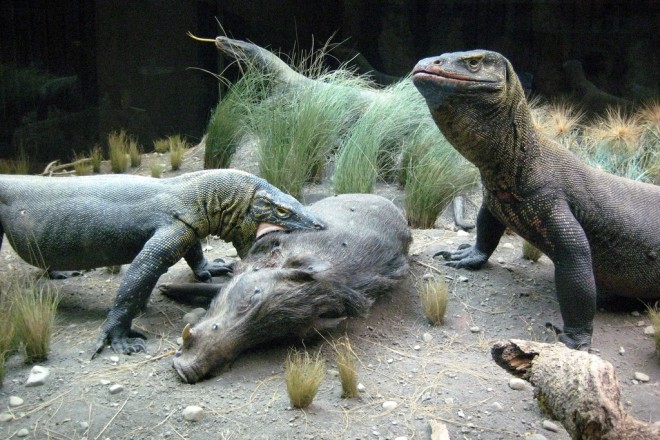 King Kong was a tragic hero. The last of his kind and formerly the ferocious ruler of Skull Island, there was no hope for the gigantic ape trapped in the dirty, noisy confines of New York City. Carl Denham -– the fictional filmmaker who led the expedition to capture Kong –- was wrong when he quipped, “It was beauty that killed the beast” at the finale of the original 1933 RKO Pictures classic. Kong’s affection for Ann Darrow is not what did him in. Civilization killed the ape. There was no way to contain something so wild and primal. Death was the only escape Kong had from a nightmare of skyscrapers and automobiles.

Kong’s unfortunate end underscores the strange nature of zoos. We revere the tiger, crocodile, and elephant for their power and symbolic wildness, yet we constantly seek to contain them within small, unnatural environments where ticket holders can pass by, complain that the animals aren’t doing anything, and then move on to scarf down a bacon cheeseburger at the nearby food court. You only need to wait near a lion or leopard enclosure for a short time to realize just how out of context the predators are. To encounter a leopard in the dark of night with no barriers between you and the cat would be a chilling experience –- a reminder that we, too, can be prey. But at a zoo, with the carnivore safely behind a moat, bars, or some other barrier, people feel comfortable enough to raise their little tykes up to the limits of the cat enclosure and purr to their children, “Aw. Look at the big kitties!”

Don’t get me wrong. Properly run zoos can play important roles in research, conservation, and –- sometimes, but never often enough -– education. But there is still something incongruous about taking an animal that we cherish as being fierce and unfettered by the trappings of urban existence and plunking it down in a small, artificial habitat just a few minutes off the Bronx River Parkway. That is what the dramatic climax of King Kong is all about. Our species had taken something magnificent and attempted to tame it, and such a primordial expression of Nature could not survive in the world we transplanted it into. This underlying point was not an original idea conjured up by the filmmakers behind the movie, but a tribute to the fate of a pair of real creatures that scientists had no idea even existed until the beginning of the 20th century.

“Here be dragons.” That phrase, as scrawled across old maps, indicated a fear of the unknown during a time when Europeans ventured out to other continents and realized that the world was more diverse, wonderful, and frightening than they imagined. Eventually, the strange became familiar and blank spots on maps were filled in, but, in at least one case, there truly were formidable dragons lurking in a little-known spot. These were the Komodo dragons (Varanus komodoensis) –- the world’s largest living lizards, tucked away along a swath of Indonesian islands.

As with many other recently found, charismatic species, the “discovery” of the Komodo dragon was actually the re-discovery of the animal by Western science. The giant monitor lizards had been living on some of the islands -– such as Flores –- for thousands of years and were undoubtedly known to local people. (They may have even preyed upon the “Hobbit” species of human, Homo floresiensis.) Naturally, the existence of these frightening reptiles spread through stories, and the rumored existence of the Komodo dragon is what eventually led naturalists to it.

Among those that had heard the stories was Lt. J.K.H. van Steyn van Hensbroek, a member of the Dutch colonial forces and the civil administrator of Reo on Flores Island. Sometime in 1910 van Steyn van Hensbroek learned of the existence of huge lizards on Flores and nearby Komodo Island from Major Peter Ouwens, who was the director of a zoo at what is now Bogor, Java. Rumor had it that some of the animals grew to be up to 20 feet long.

Intrigued, van Steyn van Hensbroek made a brief survey of Komodo in an attempt to find the animal. He was successful. Although the lizards did not seem to be as gigantic as had been claimed, the lieutenant was able to capture a seven-foot individual and sent the skin on to Ouwens. The stories were true, and, even though van Steyn van Hensbroek was transferred elsewhere and could not continue his search for more specimens, Ouwens hired a hunter who ended up bringing four additional specimens to Java. With all this fresh data, Ouwens introduced the rest of the world to the Komodo dragon in a scientific description published in 1912.

Komodo suddenly seemed like a lost world. On that island, previously undetected, was a prehistoric-looking reptile that grew to enormous sizes. There were still strange creatures hiding in isolated pockets (a fact highlighted a few years before when explorers announced the discovery of a previously unknown giraffe relative in the Congo basin, the okapi.) As has so often been the case, though, the discovery of something new and spectacular meant that many museums and zoos wanted their own Komodo monitor specimens. In fact, the concern over the scientific exploitation of the reptile was great enough that soon after Ouwens published his paper on the animals the Sultan of Bima on Sumbawa Island and Dutch authorities forbid sport hunting for the lizards and limited the number of specimens naturalists could collect.

Nevertheless, the urge to acquire specimens of the huge monitors was strong enough that in 1926 the American Museum of Natural History launched an expedition to not only acquire specimens of the monitors for their collections, but also to bring back lizards for a special enclosure being prepared at the Bronx Zoo. The explorers on this trip –- including celebrity adventurer W. Douglas Burden -– were given a limit of 15 specimens. They filled their quota. Thirteen dead animals were brought back to New York for study –- some of which remain on display at the AMNH –- and a pair of live Komodo dragons survived the trip to the Bronx Zoo.

The lizards were a sensation. Under the headline “DRAGONS OF LEGEND COME TO BRONX ZOO”, New York Times reporter Louis Rich wrote:

Last Sunday was the first Sabbath enjoyed by the pair. It was far from being a day of rest and quiet. The 38,000 men, women, and children who visited the Bronx Zoo last Sunday seemed to get special pleasure out of watching the movements of the lizards.

Despite their size, the hissing sound they made when visitors approached, and their purported connection to myths of fearsome dragons, though, the two lizards at the Bronx Zoo were not particularly ferocious. The lizards were “excellent climbers, good swimmers, and fast runners,” and the “large hooked claws” on the feet of the lizards looked dangerous, but Rich also reported that the animals were “strangely calm and unperturbed.” Maybe the docility of the lizards was due to their purported deafness, the NYT writer speculated, although Rich did note that the Komodo dragons were perfectly giving “a good account of themselves when around.”

The Komodo monitors did not last very long. Even though Rich expressed the hope that “the new animals will live long enough to enable zoologists to determine many things still unknown about lizards,” he seemed to already know that the animals might struggle in the alien and unnatural environment of the Bronx Zoo. “The lodging temporarily assigned to the new immigrants was not exactly what their mode of life in the past might have led them to expect,” Rich wrote -– the lizards were penned in “a strange, huge cage, semi-cylindrical in shape and covered with a thick wire netting, a dwelling altogether different from the roomy caves in the hills of the country of their birth.” More than that, New York resides in a much cooler climate than Komodo, and the zookeepers struggled to find the right food for their new charges. Rich observed that “In their eagerness to please the lacertilian notables, their hosts had made the mistake of serving dressed chicken cut into small portions.” The Komodo dragons were not interested in prepared fare. “The custom of serving dressed food was so distasteful to them that when a plucked fowl was thrown to them they hurled it back.” Between the inadequate enclosure, the cooler weather, and the ignorance about how to properly feed the Komodo dragons, it is no wonder that both the animals died within two months.

The poster for 1933's King Kong, moments before civilization snuffs out the monster. Image from Wikipedia.

Film producer Merian C. Cooper followed the news. He already had a notion to create a movie about a giant ape on a faraway island, and the sad twist to the Komodo dragon story gave him the ending he needed. An intrepid crew had set off to capture a mysterious, dangerous, and virtually prehistoric animal from a remote island, but when they succeeded the monstrous thing the explorers had ensnared withered and died within a cold pen of concrete and wire. Cooper made the direct connection between the Komodo dragons and Kong in a letter he sent to Burden long after the film had come out (excerpted here from the notes of Allen Debus’ Dinosaurs in Fantastic Fiction) -– “When you told me that the two Komodo dragons you brought back to the Bronx Zoo, where they drew great crowds, were eventually killed by civilization, I immediately thought of doing the same thing with my Giant Gorilla.”

“It was beauty that killed the beast” is a snappy line, I’ll grant you that, but it’s also a red herring. The undoing of these wonderful creatures -– both the fictional Kong and the real Komodo dragons -– came from the compulsion of our species to obtain and subdue nature, often for our own entertainment. We want to bring the exotic and unusual close to us so that we can look the wild in the face and marvel at it, but in so doing we often strip the very essence of the things we were so enthralled by. Natural history writer David Quammen considered this same sad truth in his essay, “The White Tigers of Cincinnati.” A tiger is magnificent in almost any setting, but tigers in zoos -– no matter how committed those institutions are to the care and conservation of the cats -– have a “hopeless impotence” about them. Self-sufficient predators are stripped of their purpose and made to rely upon daily rations delivered by humans to survive. And this poor facsimile of wild nature can be a dangerous thing. Quammen laments:

People watch the films, they visit the zoos, and by the mesmeric power of these vicarious experiences they come carelessly to believe that the Bengal tiger (or the white rhino, or the giant panda, or the diademed sifaka) is alive and well because they have seen it. Well I’m sorry but they haven’t seen it. They’ve seen images; they’ve seen taxidermy on the hoof. And the wellness, even the aliveness, is too often a theatrical illusion. Zoos are not fragments of the world of nature, no. They are substitutes.

The Wild is not something that can be carefully contained or reproduced. The very notion of doing so goes against the very definition of what wilderness is. And yet we are still stuck between our desire to experience wilderness without actually incurring any of the risks or discomfort that entails. I can only hope that nature is resilient enough to handle our confused appreciation of it.

Top Image: Part of the Komodo dragon diorama group on the third floor at the American Museum of Natural History in New York City. Photo by Flickr user wallyg.