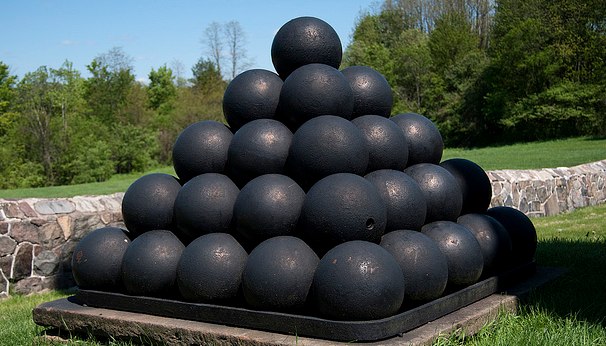 Surely you have heard about the MythBusters’ cannon accident by now. Underwire gives a nice summary.

Let me start with a couple of quick notes.

And now for some analysis. That is what you really want, right? In this case, I think there are a few questions to consider:

I don’t know all the details of the cannon shot, but I can get a few details from the news video. First, it seems they have located the three things that the cannon ball struck. Here is a shot from the newscast. 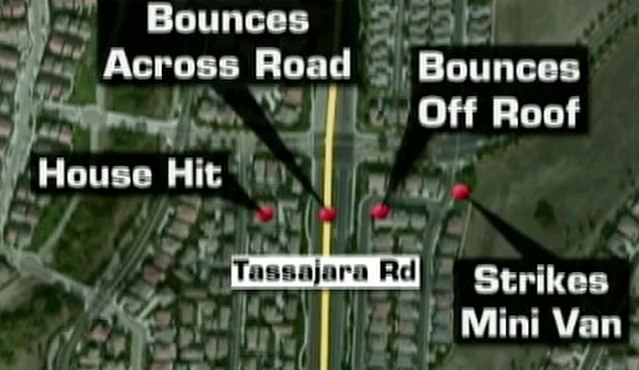 However, I am pretty sure they have the wrong starting location. This is what they show:

The left red arrow is the location of the shot as implied by the news. The other red arrow is what looks like the bomb range where the Mythbusters have exploded stuff before. Take a closer look. 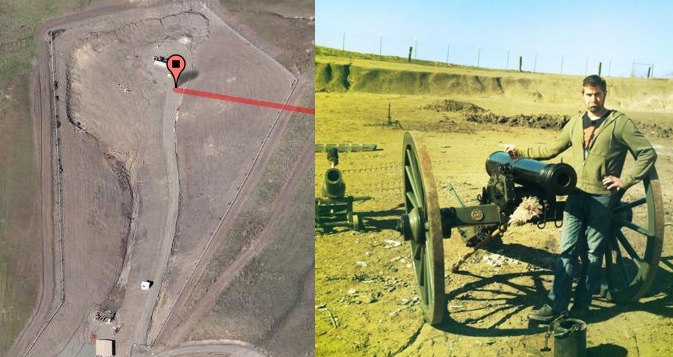 The fence and the dirt from the cannon picture sure seem to look like the spot marked on the map. So, from Google Maps the distance from the cannon shot to the first house is about 800 meters.

Ok, a projectile shooting 800 meters. How fast would this have to be going? Here is the first trick. Let me make some assumptions. First that there is no air resistance (clearly, not true). Second, let me guess that the launch angle was about 20&Deg; above the horizontal. If the cannon ball starts and ends at the same vertical distance, I could write the two projectile motion equations:

I can solve the vertical equation for time and plug that in for time in the horizontal equation. This gives: 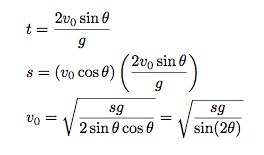 Instead of using 20&Deg;, let me plot the launch velocities for angles between 5&Deg; and 40&Deg;. 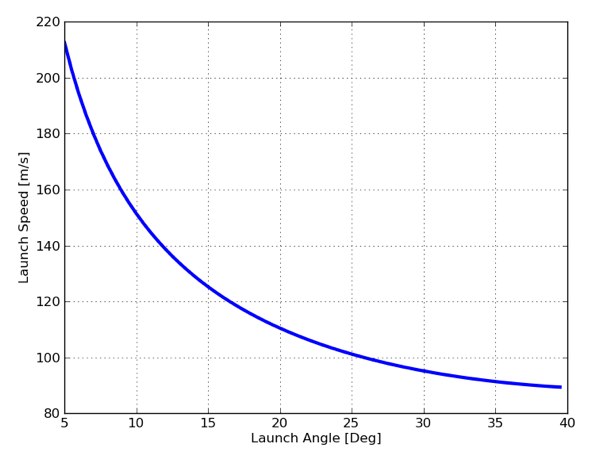 I guess this shouldn’t really be called the “launch speed” since this is the speed after the cannon ball hit something. Oh well. It looks like the starting speed is between 100 m/s and 200 m/s (if I ignore air resistance). And that is the question: can I ignore air resistance? To do this, I first need to make some assumptions about the ball. Here are my guesses.

The key thing here is the v2 term. If I use 200 m/s and the data above, I get an air resistance force of 107 N. The weight of the 5.5 kg ball would be just 53 Newtons. This means I can not ignore air resistance. Bummer.

Here is another plot. This is the same as above except I have added a similar plot of the starting velocities in the case where air resistance is included. (hint: the green line is no air resistance) 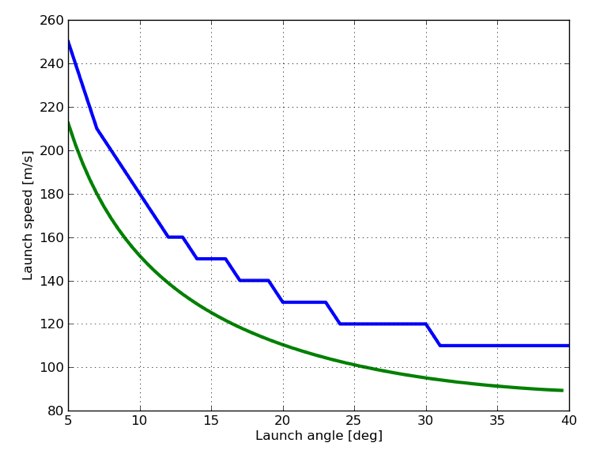 So, what was the “starting speed”? It seems likely to be in between 250 and 100 m/s (250 m/s is about 820 feet per second). Of course this assumes the ball hit the first house without bouncing. I wouldn’t be surprised if it did bounce.

This is one of my favorite things to point out: things don’t scale like you would expect. I don’t know why we expect this, but we do. You (I at least) always think something like:

Oh. A bullet has about the same density. Sure it will have a lower mass, but it will also have a smaller air resistance force. I guess a bullet and cannon ball shot with the same speed will go about the same distance.

This is wrong. Why? Let me draw a quick diagram. 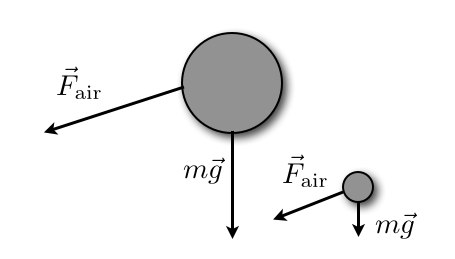 So consider a bullet with a radius r. If I double the radius, the weight will be 8 times as much. The air resistance (for the same speed as the smaller bullet) will just go up by a factor of 4. Size matters. Yoda was wrong.

Just for comparison, let me re-run the starting speed calculation above except for a cannon ball that is half the size of the first one. 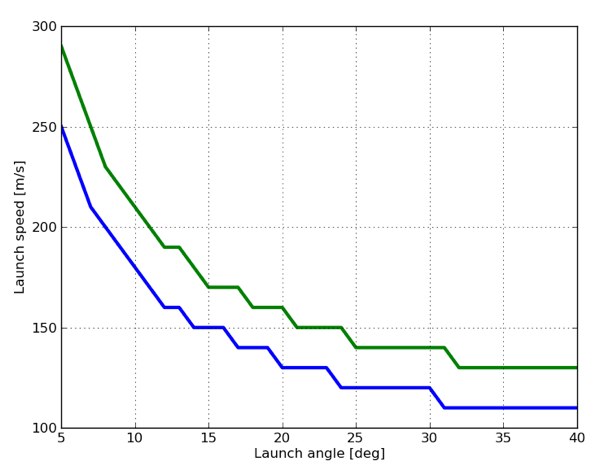 There you have it. Bigger balls win.

It is best to think about this in terms of Work and Energy. If you want to stop the ball, you need to do enough work (negative work) to decrease the kinetic energy to zero (thus stopping it). In one dimension I can write the work-energy stuff as:

Work-Energy works so well since the work done on the ball depends on the distance. Perfect since we want to find the distance (or the force). So, let’s s say we want to start with a cannon ball going 300 m/s. A barrier is set up to slow it down to 50 m/s. If the barrier is 1 meter wide, what would the average force exerted on the ball need to be? See, I just wrote a homework question.

The work energy expression would be:

I guess you could do this the other way too. You could say “how thick would something need to be if it can exert this force.” Let me do one more thing. The MythBusters like to use trash cans of water stop things. Actually, they do this on highways too. Here is a shot from The Matrix Reloaded showing these water barriers.

What if we just assume that this is just like normal water? What if the water slows the ball down just like in air, but with a greater density of material (?)? I know this isn’t actually what happens, but it is a good approximation.

Here is a plot of the speed of a cannon ball as a function of distance (in just one dimension) as it passes through water. 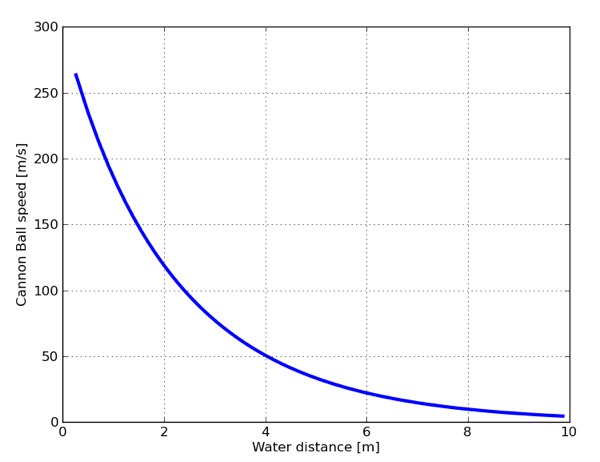 In this model (which I repeat is almost certainly wrong – but still not a terrible approximation), 2 meters of water would knock the speed down to about 100 m/s. There is a huge difference between a cannon ball going 100 m/s vs. 300 m/s.