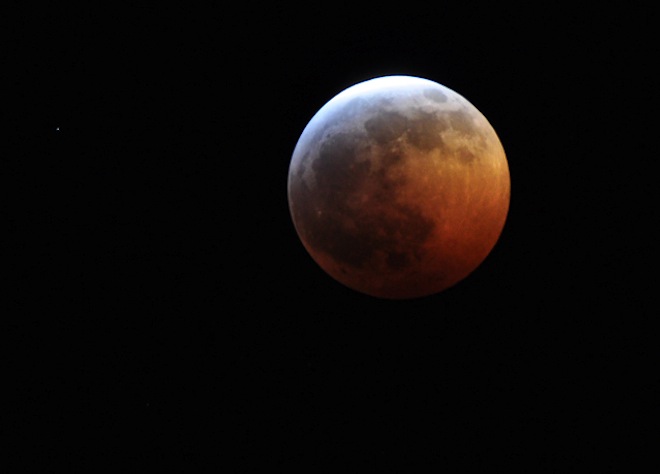 The moon will be turning a vivid red to viewers in western North America during a total lunar eclipse on Saturday, Dec. 10.

Those in the Pacific Time zone will be able to catch the event starting at 6:05 am and lasting until 6:57 am, which means only those who wake up early (or go to bed very late) will manage to glimpse the blood-red moon before the sun rises. Unfortunately, both sunrise and moonset will prevent those in the eastern U.S. from watching the eclipse.

But if you’re not in the right place to see this spectacular occurrence, Slooh — a public space camera collaboration with telescopes in Hawaii, Australia, and Asia — has got your back. Check back right here at Wired so you can watch an embedded live feed of the total lunar eclipse starting at 5:00 am PST.

Astronomer Bob Berman will be hosting the three-hour spectacle with live audio narration. He will be joined by BBC presenter Duncan Copp, who directed the Apollo documentary “In the Shadow of the Moon,” and heliophysicist Lucie Green, from the Mullard Space Science Laboratory. Viewers will have the opportunity to call in and ask questions.

A lunar eclipse happens when our moon passes inside Earth’s shadow. Sunlight filtering through the edge of Earth’s atmosphere gets refracted onto the moon, making its surface red, orange, or brownish. Saturday’s happening will be the last such event for a while – the next total eclipse won’t occur until April 14, 2014.

If you are in a good position to see the eclipse, you can participate in another fun digital project designed to measure the distance to the moon. Participants are asked to submit photographs to the International Measure the Moon Night, a large crowdsourcing endeavor that will use the parallax of different observers on Earth and simple trigonometry to calculate the distance and size of the moon.

Though these measurements are already known with high precision, Measure the Moon is set up as a worldwide educational opportunity for students and the general public to learn more about techniques such as parallax.