Apple Patent Puts You In Control of Noise Cancellation, Hints at iPad Speakerphone 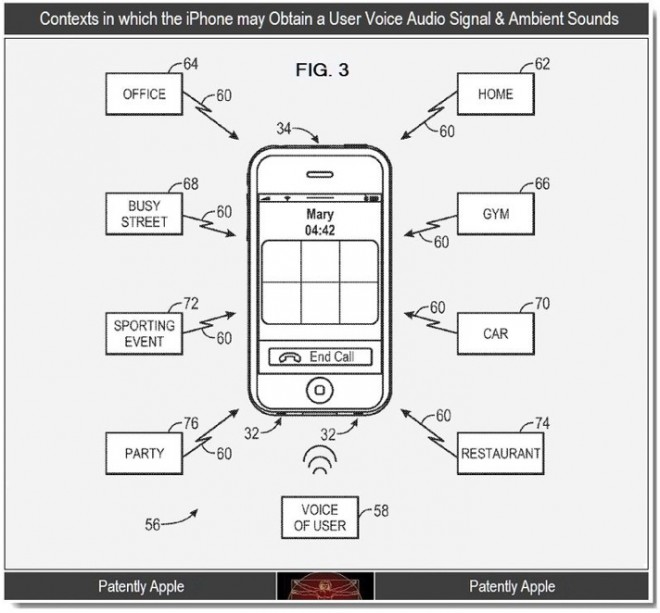 An Apple patent details a way to make sure your voice isn't lost among the noises of every day life when you make a call. Image: Patently Apple

Noise-cancelling receivers are a tricky bunch. Overdo it, and the eerie silence on the line sounds like your call has been dropped. But if it’s too low, excess street noise or nearby loudmouths could drown out whoever you’re speaking with.

Apple seems to have found just the right balance, having developed a method for ensuring appropriate noise suppression when you’re making a call. According to a recently published patent, it incorporates user-specific voice parameters so the device can adjust noise cancellation specifically in tune with your own voice.

In one possible implementation of this feature, users could adjust noise suppression settings on their iPhones to suit their environment.

Another possible version: Train your handset to recognize your voice by simulating some different situations. Using both your iPhone and a Mac for playing and analyzing sound, you could say a word or phrase while “distractors” played in the background — things like the sound of paper being crumpled, other people chatting nearby, rock music or white noise. Once your voice has been measured against these sample situations, you can set the noise cancellation settings on your phone to the levels you desire.

If you aren’t familiar with the technology, noise cancellation (or active noise control), is a way to reduce unwanted sound. It’s implemented in headphones, cellphones, and even in automobiles to reduce wind and road noise. With ANC, the device you’re using emits a sound wave of the same level (amplitude) as the offending noise source, so the amount of noise is lowered or even rendered inaudible to human ears. Currently, handsets that implement their own noise suppression do so at a general level, which users may or may not find satisfactory with their personal preferences.

Apple’s proposed system would identify your voice on a number of metrics. These include your average frequency, your frequency range, common speech sounds, and your dynamic range. It could then better recognize what part of the sound it needs to amplify (your voice) and what it should cancel out (everything else).

It’s an interesting patent, mostly because it brings something that’s usually at the back of a caller’s mind to their attention. It would let them have an unheard-of degree of control over their call quality experience. But is that something consumers even want? I wouldn’t mind doing some initial diagnostics with a new handset so it gets accustomed to my voice qualities, but I’d rather have my phone take care of everything on its own than me have to. It sounds remarkably like an Android-esque, granular level of control.

In a related patent filing, Apple also described a method for echo tone cancellation when you’re talking into your iOS device on speakerphone. Definitely useful, but more interesting was the patent’s diagram, which shows someone using an iPad as one of the callers in this scenario.

This means we could be seeing a speakerphone function on the iPad in the future. This patent was filed in mid-2010, so perhaps it may appear on the iPad 3, along with its purported Retina Display.