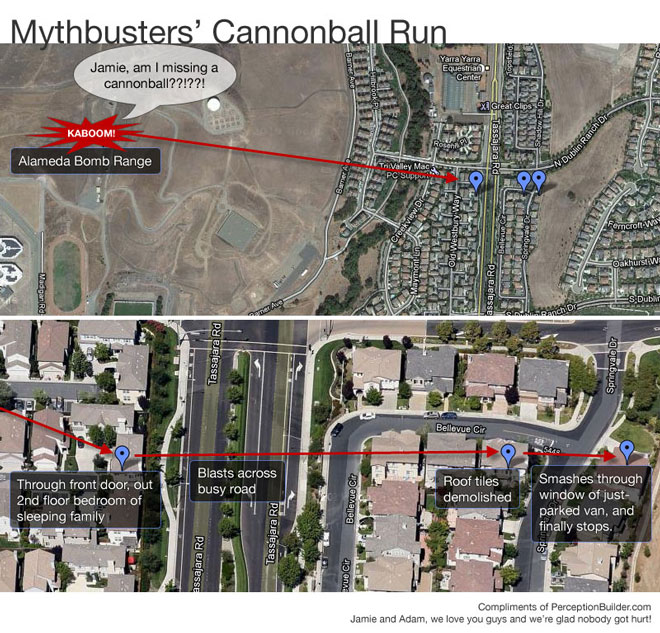 The above map details the path of the misfired cannonball from Tuesday's MythBusters test.
Image: Matt Pressnall

For a shot heard — it seems — around the world, the MythBusters cannonball misfire only really rocked one suburban neighborhood. Now a map lets you see the wayward projectile’s path through Dublin, Calif.

It’s just a little bit of Google Maps handiwork, but it really is impressive to see all the places the cannonball hit in its bizarre trajectory, which was only slightly less strange than something you might see in a Looney Toons cartoon.

“I heard about the cannonball pinballing around houses and crossing busy streets,” Seattle web consultant Matt Pressnall, who created the map and posted it here, said in an e-mail to Wired.com. “I became very curious about what its flight path was. I was imagining people sleeping in bed and cannonballs bouncing around their houses, thinking how surreal it would be to wake to falling plaster and having no idea where the hole in the walls came from.”

The now-infamous cannonball, in case you’ve been in a bomb shelter and haven’t heard, was fired Tuesday during a test for the Discovery Channel show MythBusters at the Alameda County Sheriff’s Department testing grounds. After it took a bad bounce, the cannonball crashed through a home, across several lanes of traffic, and hit the roof of another residence before ending up in a minivan.

No one was hurt in the incident, but the Dublin community the cannonball ricocheted through has now become famous as the site of one of the more random things to happen during a MythBusters experiment (and that’s saying something). The show’s producers have said they won’t air the misfire, but the close call has already given the program — a favorite of science geeks and other people who enjoy non-conventional experiments — a whole new notoriety.

“I think the fascination stems from people trying to imagine ancient weaponry caroming around their modern houses — a very interesting combination!” Pressnall said. “That and the fact that people love MythBusters and are probably concerned that this might impact their ability to blow stuff up. We are huge fans and don’t think it’s a show unless they head out to the bomb range to destroy something.”

Now that you know the geography of the incident thanks to Pressnall’s map, head over to the Wired Science blog to get the low-down on the physics of big balls.

Read 2509 times
Published in News Technologique-Tech News
More in this category: « Apple Patent Puts You In Control of Noise Cancellation, Hints at iPad Speakerphone The Future of Context: Mobile Reading from Google to Flipboard to FLUD »
back to top