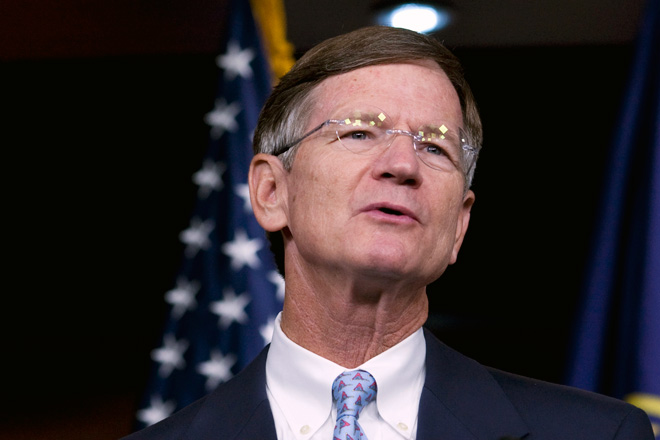 A hearing on SOPA before the House Judiciary Committee, which Smith heads, is slated for Thursday. The original measure amounted to the holy grail of intellectual property enforcement, as it effectively gave private companies the ability to de-fund websites they alleged to be trafficking in unauthorized copyright and trademark goods — without having to get a judge’s approval.

Under the amended plan (.pdf), which was released late Monday, a judge would have to order ad networks to stop doing business with a site “dedicated” to infringing activities. Under the original proposal, a rights holder could make those demands on an ad network or payment processor and effectively kill off the site.

The amendment, however, still gives legal immunity to financial institutions and ad networks that choose to boycott “rogue” sites.

Lamar’s amendments also clarify that sites ending in .com, .org and .net are not covered by the bill. Only foreign sites fall under SOPA’s wrath.

Yet the amendment still allows the Justice Department to demand that Internet Service Providers, such as AT&T and Comcast, block their customers from visiting infringing sites.

SOPA originally required ISPs to alter records in the net’s system for looking up website names, known as DNS, so that user’s couldn’t navigate to the sie.

Putting false information into the DNS system — the equivalent of the net’s phonebook — would be ineffective, frustrate security initiatives and lead to software workarounds, according to security experts. Smith seemed to acknowledge that during a hearing last month on the legislation, saying he would try to “ferret this out.”

Under Smith’s amendment, ISPs would not be required to redirect DNS at the urging of the Justice Department, but they would be mandated to employ some method to prevent infringing sites from rendering. ISPs, could, for instance, adopt tactics used by the Great Chinese Firewall to sniff for traffic going to a blacklisted site and simply block it.

Internet service providers, however, may still alter DNS under the amended version; it’s just not the required method.

The latest version of the bill is still vague on defining “rogue” sites and, like the older version, still gives the government the power to require search engines to remove sites deemed unlawful.

The proposal’s most vocal legislative opponent, Sen. Ron Wyden (D-Oregon), has floated a counter-proposal that would empower the International Trade Commission to deal with rogue websites, a measure to which the entertainment industry has objected. That proposal is still in draft form.