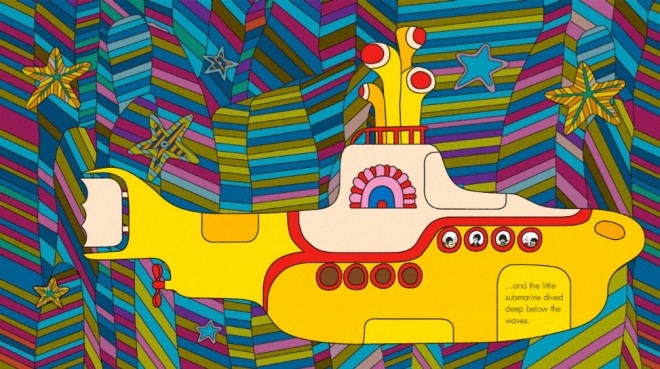 The Beatles Yellow Submarine, for sale in the iBook store, is an amazing music app.

After refusing to sell their music online for years, the Beatles have now racked up sales of over 1.8 million albums and over 10 million songs, which is not a bad haul for about a year.

Now, the Fab Four have released an excellent music app called The Beatles Yellow Submarine. For some reason, they’re selling it in the iBook store, rather than classifying it as an app — which it is, although you can’t really tell how applike it is from the screenshots. Check out the video linked below for a better view.

That hardly sounds like the books I read on my Kindle.

You can watch this iBook or whatever it is – we call it an app — on any iOS device: iPhone, iPad, or iPod Touch running the latest version of iBooks, which can support all the extras. It’s absolutely stunning on an iPad. To get a sense of just how stunning, watch the demonstration video in iTunes after it downloads. We are not able to embed them for copyright reasons — ever a sticking point when dealing with these guys and their estates, labels and publishers.

Graphic designer Fiona Andreanelli built The Beatles Yellow Submarine out of original artwork created by Heinz Edelmann as part of the film, while its storyline comes from the film’s screenplay (Lee Minoff, Al Brodax, Jack Mendelsohn and Eric Segal).

Here’s a summary of the plot, although really, the plot isn’t the point:

“Inspired by The Beatles’ song of the same name, ‘Yellow Submarine’ dives 80,000 leagues beneath the sea to Pepperland, a musical paradise where Sergeant Pepper’s band plays on until the music-hating Blue Meanies invade, sealing the band inside a music-proof bubble and leaving it a silent wasteland. But Old Fred, captain of the Yellow Submarine, escapes to Liverpool and persuades Ringo – with a little help from his friends John, Paul and George – to join him on a magical adventure to return music and love to Pepperland.”

The whole thing is very Beatles — not just in the sense that it’s from and about them, but in that it’s somehow both old and new. It’s an app being sold as a book. It’s also a remix of the original Yellow Submarine movie itself – not so different from the infringing Pulp Fiction remix that’s been attracting so much attention lately.

Basically, they have done something new (an interactive app based on a third-party’s remix) and made it feel old (like a book). Neat trick. 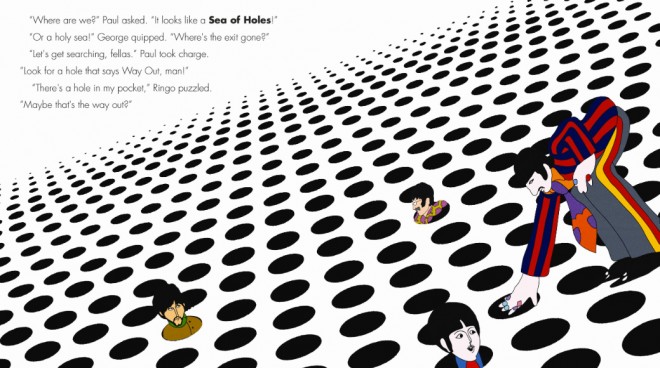