Report: Harmful Chimpanzee Research Not Worth the Pain 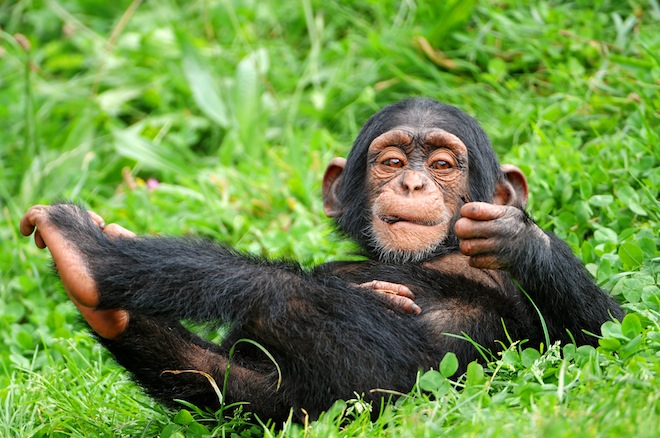 Human ingenuity and compassion have prevailed in an Institute of Medicine declaration that invasive medical experiments on chimpanzees are largely unnecessary.

Though the report’s suggestions are not legally binding, the Institute is widely respected. Its judgments often shape government and academic policy. According to the report, experiments that inflict physical and mental harm to humanity’s closest living relatives are justified only when absolutely indispensable, and when no other alternatives exist.

Thanks to improvements in drug design, research techniques and experimental methods, alternatives do exist. Of 436 federally owned research chimps and 501 kept in private laboratories, only a few might be considered important to medical progress — and perhaps not for long.

“While the chimpanzee has been a valuable animal model in past research, most current use of chimpanzees for biomedical research is unnecessary,” conclude the 12 members of the Committee on The Use of Chimpanzees in Biomedical and Behavioral Research. They describe a “decreasing need for chimpanzee studies due to the emergence of non-chimpanzee models and technologies.”

Said John Pippin of the Physicians Committee for Responsible Medicine, an animal advocacy group, “the IOM report paves the way for the end of invasive chimpanzee research in the United States.”

Leading U.S. Lab Accused of Illegal Chimp Breeding
The report, commissioned in January after the National Institutes of Health tried to return 209 retired chimpanzees to research duty, is based on almost seven months of deliberation, including reviews of hundreds of studies and testimony from dozens of experts.

Housed at the Alamogordo Primate Facility in New Mexico, the chimps had been rescued in 2001 from the Coulston Foundation, a private laboratory infamous for cruelty and negligence to animals. Many had lived for decades in captivity, subjected to forced infections and surgeries, separated from families, and held in isolation. Now, after earning the closest thing to freedom they’d ever get, they’d be sent back.

Medical research on chimps has long been opposed by animal advocates, but the Alamogordo colony’s plight also resonated in the consciences of non-activist citizens and many scientists. Faced with public outrage and Congressional pressure, the NIH agreed to postpone the move until an Institute of Medicine committee evaluated chimpanzee research, which hadn’t been nationally debated since the early 1990s, when chimps were thought important for insights into HIV.

Much had changed since, including our fundamental understanding of chimps. Cognitive and behavioral research formally described deep capacities for thought and feeling: Chimps experience happiness and grief, are both self-aware and empathic, and have culture and the rudiments of morality. On the spectrum of personhood, they’re not far from people.

In the medical world, scientists discouraged by the practical, financial and ethical challenges of chimp testing found ways to avoid it. Several pharmaceutical companies, including GlaxoSmithKline, renounced experimentation on chimps and other great apes. Only hepatitis C — a virus that, apart from infecting humans, only infects chimps — remained a highly active area of chimpanzee medical experimentation. Subjecting them to procedures that would traumatize people, and do traumatize chimps, no longer seemed essential for medical progress.

Some researchers, especially those who already experimented with chimpanzees and studied hepatitis C, still argued that chimps were necessary. But they didn’t convince the Institute of Medicine’s committee.

Read 4433 times
Published in News Technologique-Tech News
More in this category: « Mouth Taped Shut Wraps Up Final Package Lego Friends: It's Lego But, You Know, for Girls »
back to top