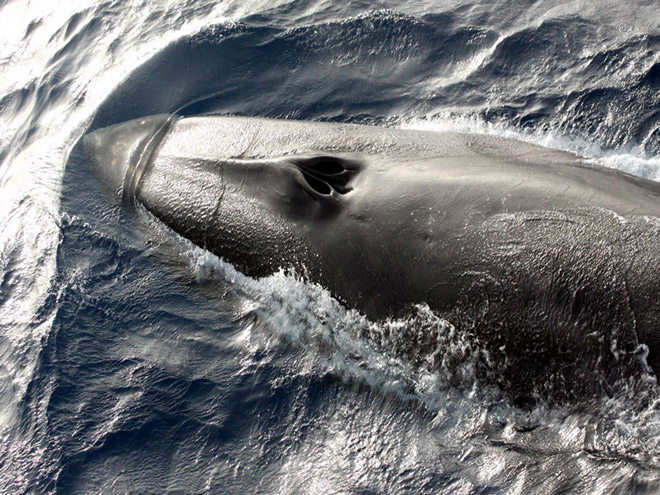 SAN FRANCISCO — Underwater earthquake recordings could help track the endangered and poorly understood fin whale, according to research presented here last week at the annual meeting of the American Geophysical Union. Most quake researchers cull the whale’s booming calls from their seafloor recordings. But one group of seismologists has flipped things around to harvest an extensive repertoire of fin whale songs.

The second-largest among whales, fin whales (Balaenoptera physalus) live in many of the world’s oceans. Yet, relatively little is known about their social habits, breeding grounds, and seasonal migration paths. The animals stick mostly to deep waters far offshore, so following them by visual surveys and radio tagging can be difficult and costly.

Seismologist William Wilcock of the University of Washington, Seattle, wondered if there was a better way. From 2003 to 2006, his group had measured undersea earthquakes that occur as new sea floor forms. Implanted in the ocean floor, their seismic detectors also picked up fin whale calls, which — at 17 to 35 hertz — overlap in frequency with Earth’s rumblings. To extract earthquake information efficiently, the group developed computer programs to detect and filter out whale songs.

Using a similar strategy to weed out seismic vibrations brought the singing whales to center stage. “We just turned the code around,” says Dax Soule, a graduate student in Wilcock’s lab. In three years, the researchers recorded about 300,000 fin whale calls near the Endeavour hydrothermal vents on the Juan de Fuca Ridge, near Vancouver Island in Canada.

Whale songs pulsed against each of eight sea floor sensors at slightly different times and strengths. The scientists traced the likely origin of each vocalization by the pattern of ringing that spread across the detectors, locating whales with a precision of about 500 meters. Soule also inferred that regularly spaced calls at 25- to 30-second intervals probably came from single animals, while shorter intervals of about 13 seconds hinted at two animals conversing. Clusters of more tightly spaced calls suggested whales traveling in larger groups.

Compiling the changing locations of series of incoming calls over time, the researchers mapped whale “tracks” or paths through the survey area. Separate whale tracks were defined for distantly spaced calls or calls separated by more than two hours. From the first year’s data, Soule attributed 100 of the 155 detected tracks to single whales, and the rest to pairs or groups swimming together.

Compared with traditional acoustic recordings, the team’s 10-kilometer-by-5-kilometer grid of seismic detectors provided more precise location information over a longer period, Soule says. So the researchers could start to link call patterns to other behaviors — whether the animals were alone or in groups, swimming or stationary. From August to October, the team detected more fin whales calling while in groups, which were swimming northward through the area. The rest of the year, especially during the winter breeding months, most whale calls came from single animals or pairs.

Some singing whales zoomed through the detection area, whereas others meandered for 20 to 30 hours. The lingering behavior could suggest that whales feed in the Juan de Fuca region, says oceanographer Kate Stafford, a collaborator at the University of Washington. The team hopes that expanding its method to other seismic stations in the region can provide more data about the whales’ habitats for feeding and breeding, as well as the routes they travel.

Although the method localizes only actively calling animals, the fly-on-the-wall approach complements more direct techniques for studying whales, particularly in areas that are hard to reach, says oceanographer Aaron Thode of the Scripps Institution of Oceanography in San Diego, California. “There’ll always be a limit to the number of tags we can attach to a subset of these animals,” he says. “Acoustics provides another window into that world.”

Read 2604 times
Published in News Technologique-Tech News
More in this category: « Blacklisting Provisions Remain in Stop Online Piracy Act Stolen iPhone? Your iMessages May Still Be Going To The Wrong Place »
back to top