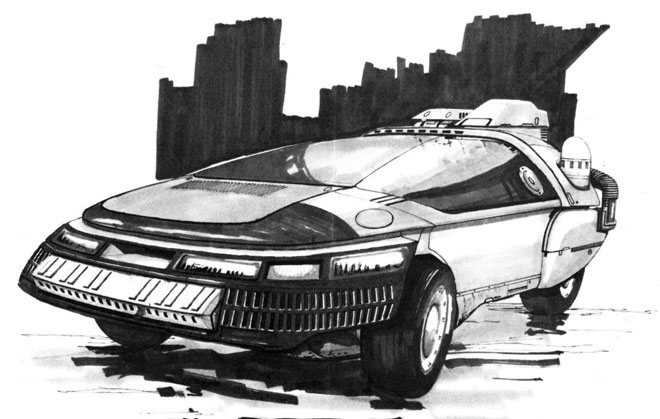 This sketch of a Spinner is just one of dozens of production designs for Ridley Scott's original Blade Runner.
Image: Blade Runner Sketchbook

It pretty much goes without saying — but we’ll say it anyway — that Blade Runner is one of the most visually stunning sci-fi films ever made. There’s a reason for that: Every detail, from Rick Deckard’s gun to the parking meters, was painstakingly planned and executed.

In 1982, the production designs that were used to create the film’s future-noir look were collected in the Blade Runner Sketchbook, edited by David Scroggy. Now out of print, the book is still treasured by fans, and now a full copy is available to read online.

The book, which brings in hundreds of dollars for used copies, collects some of the best production designs from “visual futurist” Syd Mead and director Ridley Scott, amongst others. Included in the black-and-white sketches are designs for the police and corporate Spinners (above), Deckard’s apartment, replicant outfits, the Voight-Kampff machine and even things as unassuming as fire hydrants.

Perusing the book’s pages makes it easy to see why Scott’s 2019 Los Angeles still looks as grittily futuristic today as it did when the film was released almost 30 years ago.

Flip through the Blade Runner Sketchbook below and let us know if you find a sketch of a tinfoil unicorn (we’re still looking).