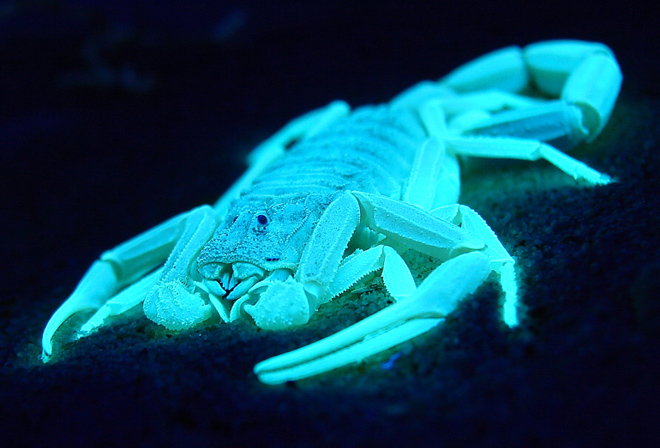 Scorpion bodies are studded with eyes, sometimes as many as twelve — and scientists may have found one more.

A scorpion’s entire exoskeleton may act as one giant light receptor, a full-body proto-eye that detects shadows cast by moonlight and starlight.

That’s still just a hypothesis, but it would help explain why they glow so brilliantly under ultraviolet light.

“It might be a sort of alarm that’s always going off until the scorpion finds shelter,” said biologist Douglas Gaffin of the University of Oklahoma. “Shade might turn down the alarm on that part of their body, so they preferentially move in that direction.”

No matter their color in daylight, be it jet-black or translucent, ultraviolet light makes pigments embedded in their exoskeletons emit photons. 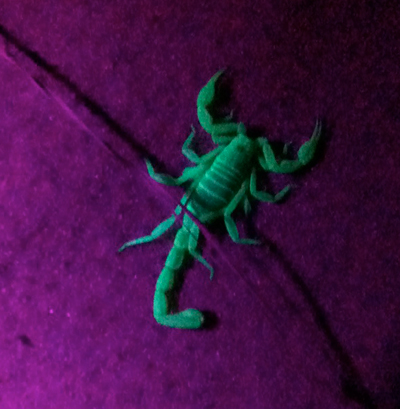 A scorpion finds shelter under a blade of grass. Image: Douglas Gaffin/University of Oklahoma.

That property is called fluorescence, and nobody knows quite why scorpions possess it. Suggested explanations include mating signals or evolutionary leftovers of natural sunscreen needed before they became nocturnal. Whatever the case, 430 million-year-old fossils of scorpion relatives called eurypterids suggest their fluorescence has been around for a very long time.

Gaffin, leader of a study published Dec. 19 in Animal Behavior, noticed during scorpion collection expeditions that one desert grassland species, called Paruroctonus utahensis, always seemed to scurry under something, even in total darkness.

“You eventually wonder, “how do they find that one blade of grass and stay under it?” he said.

Gaffin wasn’t the first to wonder if fluorescence played a part, perhaps by converting ultraviolet sunlight and moonlight into a color visible to scorpion eyes, which are attuned to greenish wavelengths.

One researcher bleached fluorescent pigments from scorpions, covered their eyes and showed they could no longer discern shelter from open space. Another study showed nerves in their tails fired when UV light fluoresced in nearby pigments.

Taking the research a step further, Gaffin recorded the behavior of more than 100 scorpions under UV, green light and longer wavelengths their eyes can’t see. The researchers completely blocked some scorpions’ eyes with foil to determine whether exoskeletons alone could “see” anything.

They found that eyes-blocked scorpions moved just as erratically under UV light as their unblinkered brethren.

“Maybe they’re collecting stray UV light, maybe starlight, and pigments turn it to green, and that’s what their nervous system is picking up on,” Gaffin said. “How do they do this? I don’t know.”

Starlight is far dimmer than moonlight, barely enough to make scorpion pigments fluoresce. But Gaffin said the vast quantity of pigments may add up in sensitivity to something comparable to an eye.

To find out more, Gaffin plans to coat scorpions with UV-blocking sunscreen. There’s just one problem: It kills them in a couple of days.

“I might cover them in scotch tape, then put the sunscreen on that,” Gaffin said. “I’ll find something that works.”