Freshmen at the University of Southern California’s School of Cinematic Arts spent the past semester playing an immersive card game, Reality. Participants collected cards hidden across campus that were used as prompts for collaborative storytelling projects.

By Nathan Maton and Rebecca Thomas, originally posted at ARGNet 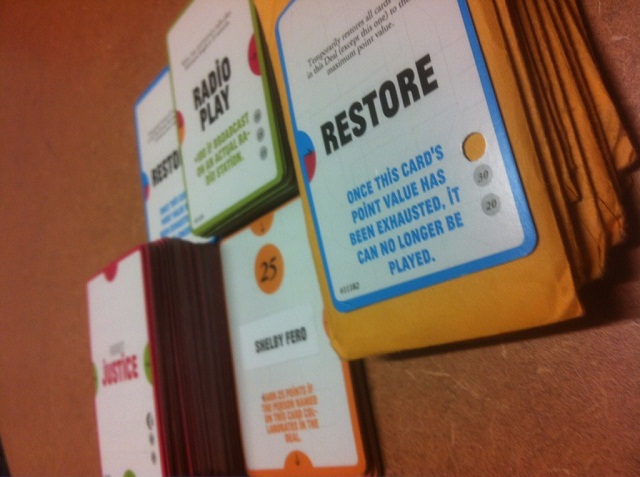 School changed this year for the majority of freshman at the USC School of Cinematic Arts. Driven, talented future media makers normally waited until their sophomore year to produce any major media through the program, but this year USC partnered with Ph.D. candidate Jeff Watson to produce Reality, an alternate reality game focused on media creation.

Reality, which just completed its first season, is one part trading card game, one part media creation tool, and one part web portal. Three hundred unique cards, color-coded by type and designed to fit together, were handed out to students who unraveled a series of clues leading to the game’s secret campus headquarters or tucked away for discovery as the game progressed. As students discovered other students who were playing, they made “deals” by trading or pooling cards that led to collaborative projects and then published their work to Reality’s web portal so other students could rate and review the projects. Winning projects earned interesting rewards, like meeting industry professionals, for the creators.

Designing Reality
When USC pulled together a team to design Reality, they had one goal in mind: to give incoming freshmen the opportunity to collaborate with other students and sharpen their skills before their sophomore year.  Watson was approached for the project because his dissertation is on transmedia interaction design. He put together a team with Simon Wiscombe, with Tracy Fullerton as an advisor.

Watson didn’t want students to feel like they had to join the game. Designed as an alternate reality game, Watson felt that students had to come to the game driven by their own curiosity for it to be truly successful, thus the typical ARG mysterious message that pulls players into the game world.  Here’s how students describe their initiation into the game:

“When I started playing the game, I was eating dinner with a friend and she got a call from another friend of mine asking her to come to Fluor Tower,” says Ben Chance, a Film & Television Production major and one of the most active players. “My friend asked if I could come because I was sitting there. There was a pause. After a moment, I was told I could come. We were told we were going to a secret meeting. We came into the room and there were 8 people there and they all had their cards on the floor. I remember telling my friend, ‘This semester just got a whole lot more interesting.’”

“I remember getting a text from my friend Miranda Due,” recalls Allison Tate-Cortese, another Film & Television Production major.  ”She had gotten an email from Reality (an email address she didn’t know). It had a cryptic message saying that if you can decode this email, it would tell you where to go for further instructions. It had a bunch of jumbled letters at the bottom. I was pretty shocked off the bat, it was out of the blue and came in a few days before class started.”

Team Formation
One interesting aspect of the slow uptake of the game (as intentionally hoped for) was the ability of those early adaptors to game the system.

“One of the things that helped get me into USC is that I’m a motivated person around challenges so when a challenge was presented to beat out other freshman students in the production of visual media it sounded like a lot of fun,” noted Chance.  ”We formed a group of ten people early on and that was unheard of, other groups were getting together in twos and threes.  One of my friends, Josh Rappaport, asked if I knew about the game and when I said yeah I’m in a group of 10 people he was shocked.  He only knew about 4 or 5 other people playing the game so when he heard about a group of 10 other people playing the game that was unheard of.”

These early adopters dubbed themselves Marra and created an “exclusivity contract” to ensure all members participating in a challenge would get credited for the project. It became impossible for other players to beat this collective force and created some real heat between freshmen. The prizes for the game included things like class recognition, exclusive meetings with top professionals like Robert Zemeckis and famous Hollywood producers: one student even walked away with an internship offer based on the meeting.

Eventually, a rival group formed called the Tribe. While we didn’t talk to a Tribe player, Tate-Cortese, one of Marra’s members, described the Tribe’s rationale as “there are more students outside of Mara than within so why don’t we compete with that and use our massive amount of people to compete.”  It worked.  Before the Tribe’s formation, Marra won five weeks in a row. Once The Tribe started working together, they won five weeks in a row.

After this rivalry, a resolution emerged as a “forbidden deal.” “About week eight [of the rivalry] maybe, there were three Mara members working on a deal,” Chance explained. “Across the hall, all the Tribe members invited us into a meeting and we observed them and talked to them about what we wanted.  One of the members threw out the idea of doing  a ’super project.’” The idea stuck.  Chance got intrigued about a Romeo and Juliet style deal and they shot a cross-team deal, uniting the teams for the first time.

Prototyping Challenges
While gameplay of this nature is emergent, it is worth examining why the designers made the decisions to include elements like forced collaboration that led to this type of group deal making.

“Our initial design didn’t have cards at all,” noted Watson.  ”It was much more like something like SF0– a collaborative production game played through a web portal, full stop.”  Fullerton, Watson’s advisor on the project, pressed for more. As she explained,

From the beginning, the primary goal of the project was to get students talking, working, and forming lasting social bonds amongst the various divisions of the school . . . . The fact is that some students are more online-focused than others, and we didn’t want to make something that privileged that way of interacting.  A face-to-face mechanic, that prompted casual discussion and ramped up to collaboration was what was needed.

Watson had been toying with an interlocking card game system for years, and that became the basis for the revised design. The initial deck design featured media artifact cards as well as action cards that would direct the making, but that still wasn’t flexible enough for what the team wanted. Finally, the team designed a deck carefully balanced between four types of cards: Maker, Property, Special, and People. The cards were flexible enough to provide the type of random prompt generation the design team wanted while still remaining portable enough to facilitate the face-to-face interactions necessary to the game’s success. After the team developed the game’s mechanics on a collaborative wiki and creating a set of test cards, Wiscombe helped refine the experience and translate it into a fleshed-out deck of cards. 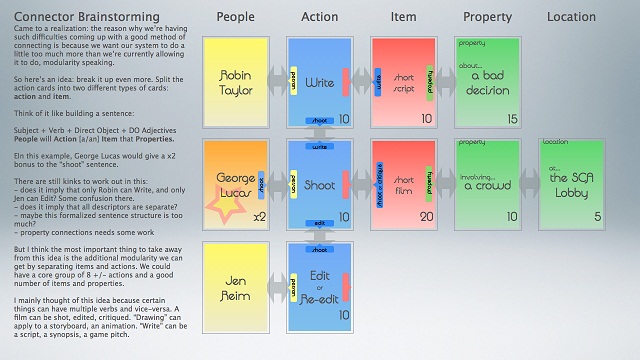 Watson gave one example of the reasoning behind the team’s card design decisions.  They wanted everyone to start with fairly different cards so they could discover, trade, and share new cards by talking to other players.  ”If everyone had the same 10 cards in their starter pack, players wouldn’t be curious about what other players had in their packs . . . so we looked at the approximate size of what we expected would be our start-up player base — we designed for around 200 players — and then did the math from there.”

The team got to know their target audience extremely well, and adjusted the design accordingly. As Watson explains,

There’s a temptation in designing games for institutional interventions that says you should make your game maximally scalable such that other institutions can easily port it into their programs. In my experience, designing for scale from the start depersonalizes and flattens games. Our mandate was to make something that would intrigue, galvanize, and mobilize our players, and we felt that the best way to do this was to create a genuinely tailor-made experience, something that couldn’t happen anywhere else and that was precisely tuned to this particular player population. That was our priority.”

Despite the team’s focus on crafting a project particular to the USC School of Cinematic Arts, their game produced quite a few mechanics that could be readily transferable, including the way the cards link to a web-based collaborative production game.

Of course, design processes are never ideal.  The beginning of the semester quickly approached and the team needed to playtest the system with limited time. They were able to bring in members of a local pervasive gaming group to help test the mechanics and make sure they were headed in the right direction. In the end, the inaugural season of Reality proved to be its real playtest beyond figuring out the mechanics.

Design Philosophy
At its heart, Watson made something quite different from many ARGs.  Even with a background in making traditional story-driven ARGs, he finds the mantra, “It’s all about the story” to be counter-productive.  ”Design your ARG experiences so that they function procedurally — that is, create an actual game that drives participation and play among your audience such that the play itself generates the experience,” Watson argues.  ”In our case, we had a lot of eager young media-makers to work with, and so we were able to leverage their creative and performative motivations in order to generate the overall experience.”  This seems like a much needed perspective change, focusing on the mechanic and using the story as an impetus for gameplay.  Watson allowed the players to tell their own more meaningful story about personal ambition and competition and collaboration.

What’s Next
It sounds like Reality will return again if student sentiment is any signal.  The two students we spoke with both admitted that Reality was their favorite part of their freshman fall semester.  They are sad to see it go, and are excited to be a part of the next iteration (even if it is just talking to next year’s freshman about the experience).  Beyond the sheer fun, Tate-Cortese found the game to be an exceptional learning experience. “I think the game was brilliant because it created an incredible space for experimentation and growth.  It was brilliant because you felt safe because you can try things that were outside of your comfort zone, but you didn’t have to worry about a grade accompanied with it.”  She wants to be a director, but got to experiment in all of the different roles in a production.

“Everyone I spoke to in the upper classes wishes they had this experience,” Tate-Cortese said. “It speaks to the future of education and film production, and it just really proves that they are cutting edge and at the forefront of film production and education.” It also allowed for several students outside of SCA to participate in the production process and Chance thinks they are even better equipped to be SCA students (many of them want to transfer) than the SCA students who didn’t participate in Reality.

Interested in learning more about the projects the students created as a result of Reality? Check out the game’s online archive of deals, where students shared their work, explaining the rationale behind each project. Highlights include a special effects-ridden science fiction trailer, a satiric dramatization of students’ experiences with the project, and a game of live-action Minesweeper at IndieCade. A stealth version of the game played out at DIY Days resulted in two additional video productions. Henry Jenkins wrote twoblog posts explaining and contextualizing the game within the education space, while the Workbook Project’s Transmedia Talk podcast featured an interview with Watson.