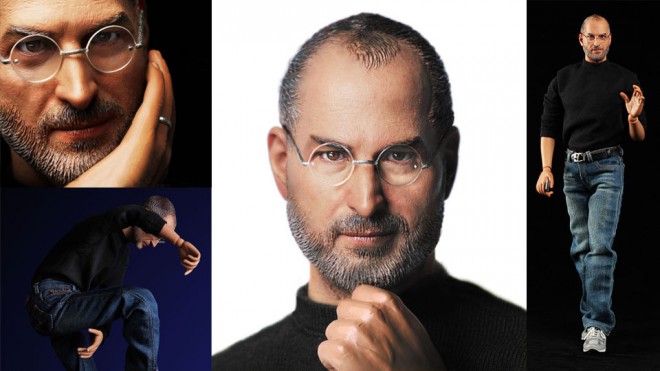 The many possibilities of In Icons' Steve Jobs action figure. Image: Jesus Diaz/Gizmodo

You just knew a boatload of bootleg Steve Jobs merch would start flooding in after his passing last year. Like street vendors outside of the World Series, online retailers started producing T-shirts, books and other various and sundry items. But after a Chinese manufacturer unveiled a miniature Steve Jobs prototype doll, Apple’s legal team pounced.

Apple’s lawyers sent a letter to the Chinese company stipulating that “any toy that resembles the technology company’s logo, person’s name, appearance or likeness of its products is a criminal offense,” according to a report from The Daily Telegraph.

In California, personality rights (California Civil Code Section 3344), which address the use of a person’s name, likeness, voice, or signature without their prior consent, last through the entirety of a person’s life, and for 70 years after their death.

The offending company in question, In Icons, quickly gained media attention earlier this week after debuting the 12-inch figurine on New Year’s Day. The doll comes clad in Jobs’ signature uniform and a few accessories: Two pairs of glasses, a black turtleneck and blue jeans, New Balance trainers and a pair of apples (one bitten, of course). Shamelessly, it even includes a “One More Thing” keynote backdrop.

This isn’t the first Jobsian Barbie to get slapped with a C&D. In November of 2010, Apple requested M.I.C. Gadgets cease marketing and selling an iPhone-wielding $80 Steve Jobs doll.

Let this be a lesson to future bootleggers: If you’re going to make any sort of unauthorized Apple paraphernalia, keep it on the down-low, or your venture may be incredibly short-lived.