Images of Purported Motorola Droid 4 Leak Into the Wild 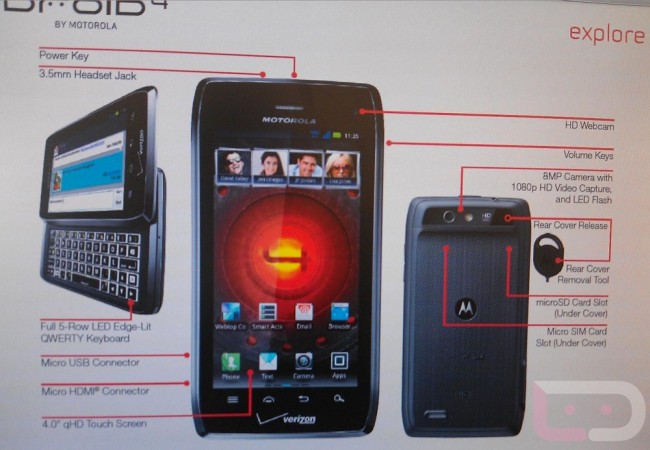 Hollywood’s sequel season is upon us. The formula demands that movie studios follow up each blockbuster success with a rehash that doesn’t stray too far from the original script.

And now Motorola may be following Hollywood’s lead. Images that circulated on Monday suggest an imminent follow-up to Motorola’s highly successful Droid smartphone. Technology blog Droid Life acquired images of what look like spec sheets for the Droid 4, the aptly named fourth iteration of Motorola handsets, offered by Verizon.

The pictures suggest we’re in for a Droid unlike anything we’ve seen in the past. From both the front and the back, it looks a lot like the recently released Motorola Droid Razr, the company’s sequel to its massively popular 2004 Razr flip phone. Both feature a slim, planar back with a raised section that houses a rear-facing camera and LED flash.

Nonetheless, it looks as if the Droid 4 won’t stray too far from its lineage. The leaked images also show the phone sporting a slide-out QWERTY keyboard, a feature still aimed at those keyboard enthusiasts who can’t let go of physical buttons (read: BlackBerry owners). Of course, keeping the keyboard means tacking on an extra quarter inch of thickness, making the phone twice as thick as the current Razr. But as with any feature-packed phone, there will always be trade-offs.

Other details suggest more of the specs we’re used to seeing in a high-end Android phone: 1080p HD video recording, front-facing HD camera, microSD card slot and HDMI output capability. That’s not to mention a dual-core, 1.2GHz processor backed by 1GB of RAM. We’d expect nothing less than lots of power and lots of ports from a phone with such a robotic name.

There’s no official release date for this completely unannounced phone, but Droid Life says all signs point to an early December launch on Verizon.