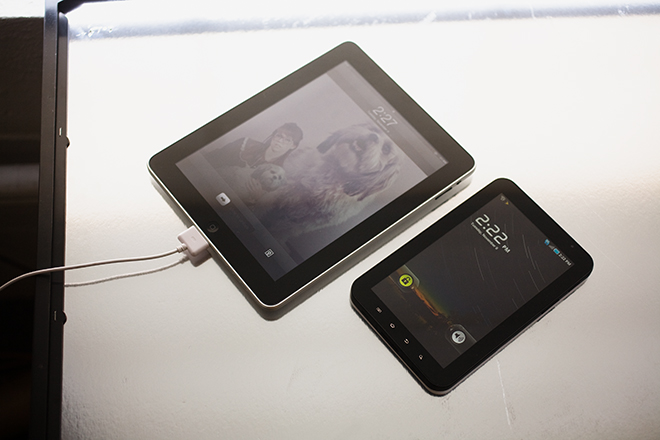 Apple is involved in so many patent suits across the globe, one might think the Cupertino hardware giant is only interested in crushing would-be competitors with iron-fisted lawyers.

One might think that, but one might be wrong. The Verge just reported that Apple is licensing one of its patents that describes list scrolling and document manipulation on a touchscreen display.

The patent in question, #7,469,381, is titled “List Scrolling and Document Translation, Scaling, and Rotation on a Touch-Screen Display” and it turns out Apple licenses it out to IBM and Nokia.

This patent refers to the iOS scrolling function that reveals a background texture when you scroll past the end of a document or website. This particular patent is also being disputed in an ongoing courtroom battle with Samsung. Apple offered to license this patent to Samsung in November 2010, but Samsung apparently didn’t take the deal. HTC and Nokia have also been sued over this particular patent.

Apple and Nokia, in fact, have long been entangled in a patent spat regarding patent infringement in both directions. The litigation lasted two years, and ended this summer. So it’s possible that licensing out patent #7,469,381 was part of the settlement, as sharing its intellectual property is such an unusual move for Apple.

“Offering up a distinctive software feature covered by a strong patent indicates a level of willingness to negotiate that we simply haven’t heard from Apple in the past — it’s a far cry from Steve Jobs telling his biographer that he was willing to go “thermonuclear war” on Google and Android OEMs for infringing Apple’s patents,” wrote TheVerge’s law expert Nilay Patel.

Indeed, FOSS Patents’ Florian Mueller told Wired.com in an interview in October, “Apple really seeks and optimizes its products for differentiation. Apple takes a more exclusionary approach to patent enforcement.” Microsoft, on the other hand, takes the complete opposite approach to intellectual property. It frequently licenses out its treasure trove of patents to gain copious royalties from Android manufacturers — for example, using patents more as a means of profit than a way to differentiate its product.

Read 3139 times
Published in News Technologique-Tech News
More in this category: « Groups Petition for Right to Hack the Xbox, Back Up DVDs V for Vendetta's Alan Moore, David Lloyd Join Occupy Comics »
back to top