Baby sloths are completely irresistible. Perhaps it's because their faces are shaped in a permanent smile. Or maybe it's because they love to hug -- stuffed animals, trees, other sloths, people. It could simply be their signature comical slowness.

And orphan baby sloths? Well, If you think you can resist them, try watching this video only once.

The trailer is just a taste of the new documentary, "Too Cute! Baby Sloths," airing Saturday Dec. 17 at 8 p.m. ET on Animal Planet. The show is filmmaker Lucy Cooke's follow-up to her wildly popular internet video "Meet the Sloths." Both were shot at the Aviarios Sloth Sanctuary in Costa Rica.

The sanctuary takes in any sloth in need, but is mostly populated by orphaned baby sloths who lost their mothers to power lines or road traffic or other accidents. There are currently around 160 sloths there. I can attest that it's an amazing place, and well worth a visit (or a donation). Cooke spent a year filming the lives of the sloths there, from potty-training to pole-climbing class. The new documentary follows five main stars, and according to Cooke, uncovers a surprisingly active (though slow) lifestyle filled with love, loss, lust and humor. (There is even footage of some super slow sloth sex.)

Cooke shared with Wired some exclusive images of the sloths that star in the documentary and some of the other sanctuary residents, such as the photo below of an orphaned two-fingered sloth named Toby. 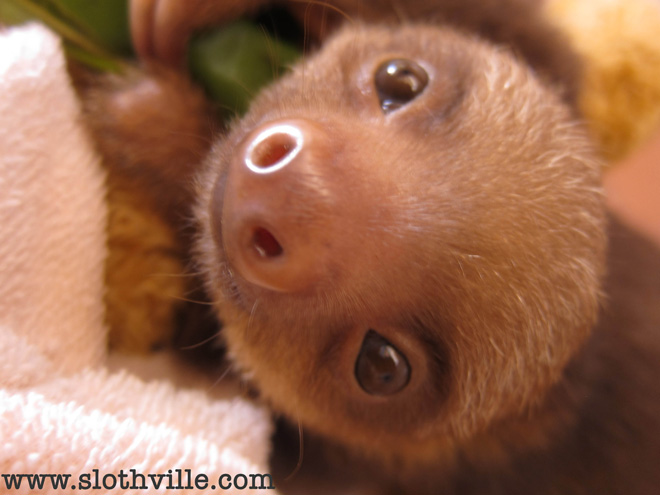 Read 3455 times
Published in News Technologique-Tech News
More in this category: « It Won't Be Easy for Iran to Dissect, Copy U.S. Drone An Electric Motorcycle Just as Fast as Gas »
back to top