An Electric Motorcycle Just as Fast as Gas 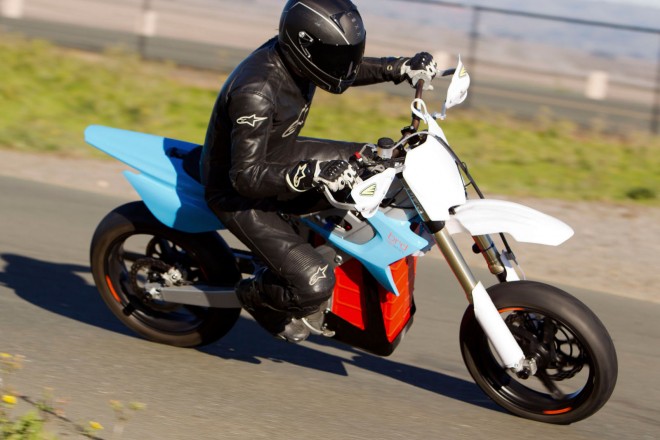 By Sean Smith, Hell for Leather

This is the BRD RedShift SM. It weighs 250 pounds and makes 40 horsepower. Unlike the supermotos we’ve seen from, say, Brammo or Zero Motorcycles, the RedShift is fast, having been designed from the start to compete with existing motocross and supermoto bikes. And unlike other electric racing prototypes, the RedShift SM has been developed with consumer production as the goal. BRD handed us the keys to the development prototype. Does it perform as promised? Well almost, until it broke.

First, the backstory. BRD is a Bay Area startup coming at the e-moto scene a little differently. Rather than designing its bikes in a vacuum, it took a good look at what’s possible using the best battery and motor technology. Then it realized it could build something close to the current crop of 250cc motocross bikes. The KTM 250 XCF-W, for example, produces 39 ponies and weighs 249 pounds with a full tank of gas.

The RedShift MX motocrosser and RedShift SM supermoto are the first machines from BRD, a company started by, and for, guys who like to ride. 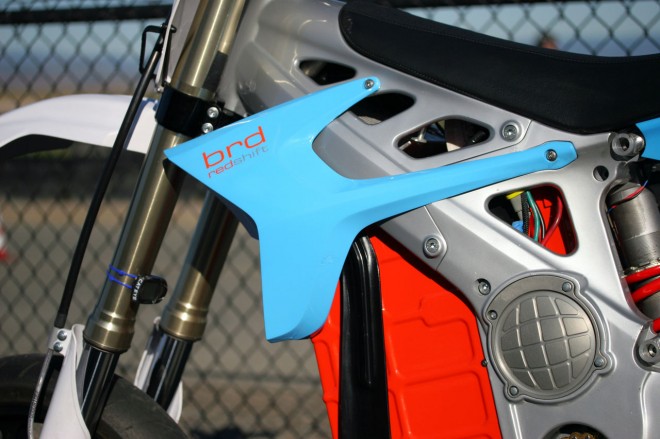 Aside from springs, damping, wheels, the front brake and the fender, the bikes are identical. The chassis is built in two pieces. One includes the steering head, upper battery mount, radiator. The other uses the motor and battery as stressed members while supporting the subframe, upper shock mount and swingarm. The two pieces bolt together near the top of the battery. You could call the design a modular twin-spar/backbone hybrid. BRD hasn’t released chassis specs but says the geometry is based on existing MX and supermotards.

The 5.2 kilowatt-hour battery should be good for 50ish miles of commuting two to three 20 minute track sessions. (Recharge time is around four hours at 110 volts.) The Redshift offers a unique advantage over gas-powered competitors: The 200-hour maintenance interval is far more attractive than changing the oil every five hours, adjusting the valves every 20 hours and replacing the piston every 40.

With a normal bike, you start the engine, pull in the clutch and click into first gear before even thinking about going somewhere. The BRD is considerably simpler. Flip the kill switch to “on,” push the start button, count to five and twist the throttle. Bam!

RedShift had a KTM 250 XC-F supermoto at the track for some back-to-back comparison. The BRD feels lighter and smaller than the KTM, even though it isn’t. 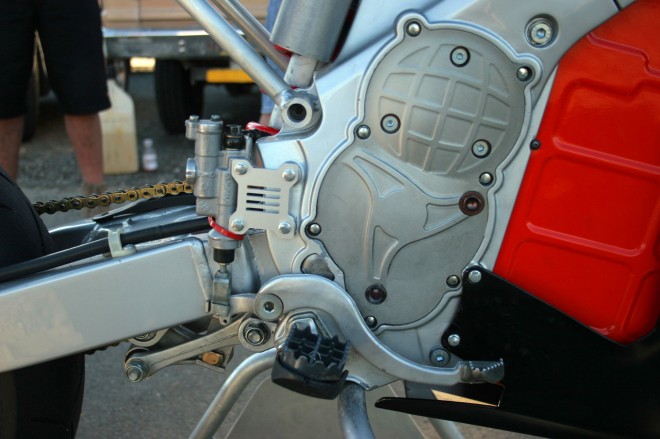 It doesn’t feel much faster, for two reasons. First, the “journalist special” state of tune lowered the redline from 12,000 RPM to 10,000 and softened the throttle response because electric motors provide all their torque the moment they start spinning. Second, the power delivery is so much smoother. Lap times don’t lie though and it really is faster — at least while riding at a conservative anti-crash pace). On my second lap of Infineon Raceway’s kart track, I matched the 1:09 I’d set with the KTM. I grew steadily faster from there until I decided to try out the back brake and almost crashed. Whoops. Crashing a priceless prototype probably (almost certainly?) would get me blacklisted from BRD. Still, I kept pushing hard until computer troubles forced me to pit early and call it a day.

The thing about prototypes is that they’re not finished. The forks, brakes, swingarm and subframe/tail of the SM will see some changes before production. Motor controller programming also will see some changes. The goal is to fix obvious issues like the intermittent stutter and surging that forced me to pit and further refine power delivery and throttle response. The neat thing is that it’s all controlled by code. If you think an auto-tune Power Commander is fun to play with, imagine how cool it would be to tailor every aspect of a bike’s power to suit your riding style and taste.

BRD hopes to deliver the first bikes to customers at the end of 2012. If they’re to meet that goal, they’ll need to do a lot more testing. The parts already done (chassis, motor, battery, design) are very good and the specs — 250 pounds, 40 horsepower — mean the SM definitely will be able to keep up. The only question is whether RedShift can find enough early adopters willing to pay $15,495 for an ultra-low maintenance race or play bike. At roughly double the price of the conventional competition, you have to be a big believer in BRD’s long-term, cost-of-ownership math to make the jump. 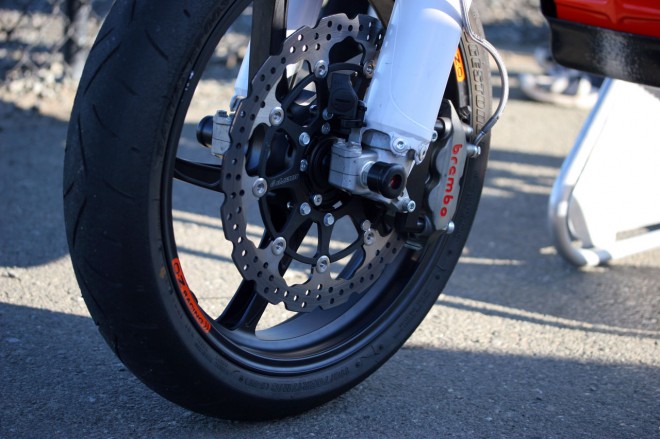